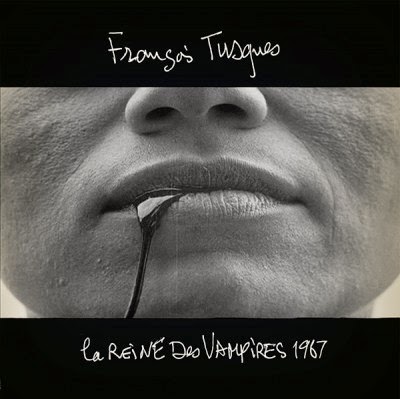 I just watched "World War Z" and "Warm Bodies", recent zombie movies of questionable quality, as well as "Under The Skin", an utterly bizarre movie with a phenomenal soundtrack by Mica Levi, hence this video below too. Especially in horror movies, the soundtrack is essential. Watch a suspense scene without the sound, and the effect is gone, making the scene slow or even completely silly. Keep the sound, and take away the picture, and the effect is in all likelihood still present. Nothing like sound to create emotional experiences.

But now for the topic itself: in 1967, French avant-garde composer and pianist François Tusques was asked by director Jean Rollin to make the soundtrack for a vampire melodrama, called "Les Femmes Vampires" (the vampire women), then erroneously announced as the first French vampire movie ever. Tusques assembled a band with Barney Wilen on tenor sax, Eddie Gaumont on violin, Jean-François Jenny-Clark and Beb Guérin on bass. As you can expect, the music is eery, haunting, full of dread, anticipation, angst, anxiety and fear. It is ominous, dark, unpredictable, gloomy and sinister. It is equally well-paced, slow, refined, sophisticated, precise and accurate. In contrast to what was the norm at that time, the soundtrack has no clear theme, just sounds full of dramatic tension and effect. The violin, the sax and the bass create long phrases hanging in mid-air, coming from nowhere, not seeming to go anywhere, yet with astonishing presence when they are in the here and now, immensely powerfully.

The album gives the complete recording of the session, even if only parts were used for the soundtrack (think of Mike Oldfield's score for The Exorcist). The A-side presents the full pieces from which some snippets were used in the movie, the B-side brings material that was not used in the movie, even if it is equally strong. When Rollin made his second vampire movie, "La Vampire Nue" (the nude - female -vampire), he re-used the material on the A-side, rearranged it and all this without Tusques' prior consent.

To have this music back, now, after almost fifty years, is amazing. When you watch the movie excerpts on Youtube, the movie looks incredibly dated, real sixties' stuff. And probably the most amazing thing is that when you listen to the soundtrack, it still sounds incredibly modern. It is today's music. Think of the vision and the audacity it must have required then. The movie by Jonathan Glazer can be highly recommended - taking into account of course that I'm not a film critic - because of its weird tension, great imagery, audacious editing and overall atmosphere of doom, loneliness, horror and alienation (you actually never get a clue about what's happening), and in which Scarlett Johansson drives around Scotland in a white mini-van, doing away with local male individuals. I had never heard of Mica Levi, but I read that she's a songwriter and singer of a pop-band, as well as DJ. Maybe I should rethink my opinion of these three categories of musician, or I should be happy that she does nothing on this album of what you expect those kinds of musicians to do. The soundtrack has scores for violin, ambient and electronic sounds, with possible references to John Cage and György Ligeti, and Bernard Hermann's piercing violin score for the shower scene in Psycho.

Like the movie, Levi has ventured far beyond the norm, maybe redefining the concept of soundtrack. You could almost turn it round, and say that the movie is the videoclip for the music. Almost, because if Tusques' album really can be listened to as a stand-alone piece of music, the soundtrack for the "Under The Skin" has the main theme repeated into the various tracks, which works better in a movie setting than when you listen to the album.