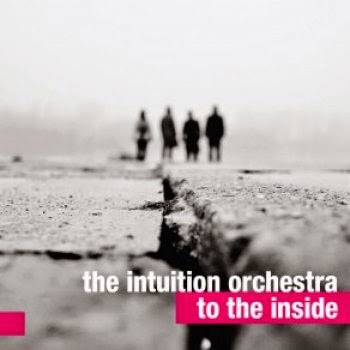 The Polish group The Intuition Orchestra, is actually a trio, fronted by Ryszard Wojciul, with Boleslaw Błaszczyk and Jacek Alka.  Having played in the politically charged underground Polish rock scene in the late 80's, and studying music at the Warsaw Music Academy, Wojciul was exposed to jazz and modern classical, and grew interested in improvised music.  When the economy collapsed, he worked for a corporate radio station, and after a decade, returned to playing music, with the emphasis on total improvisation.  As a result, no two concerts or albums are alike. On this album, To the Inside, they are accompanied by several musicians, Marcin Olak, Wojciech Szewko, and Jacek Malicki on guitars, Monika Szulińska on percussion, and Maciej Szczyciński on double bass.

The opening track, "Czas Bylo Ruszac," is short but very atmospheric, emphasis on the guitar with a little electronics from Blaszczyk.  Delicate but with a flurry of notes, it remindes this listened of early Pink Floyd.  The following track, "Transuranowce,"  has Wojciul playing this sax over a funky percussive Gamelan influenced beat, with a heavy bottom edge provided again by Blaszczyk's electronics.  It is an outstanding tune.  The group is at their most playful when they let things loose, as in the aforementioned track and in "Zeriba, Zeriba," another wild percussive heavy track, breaking halfway in with a Wojciul solo, then moving back towards a slower but still percussive led beat.  An Asian influence is definitely felt, merging with a European stum und drang sensibility; a light exotic flavor tempered by free form unpredictably and drama.  "Stolon" is more contemplative, the guitar providing a gentle yet unpredictable solo path, with electronics and a tabla like percussion providing a little tension and spatial flavor.  "Transsylwania" is another percussive led track, with piano doing a long solo, sometimes melodic, other times percussive.  "Do Wewnatrz," is a guitar led improvised tune with a pseudo flamenco beat.  Only occasionally does it feel that the improvising leads to nowhere, as in the anemic "Dziwactwa Zabobon," where there are a lot of things happening  -- percussion, sax, electonics, providing a mood, but not leading anywhere, but it is rare.

To the Inside is a strong album of improvisation that harnesses a global range of sounds, fusing them with their Polish sensibilities, and creating a strong work of sonic art.