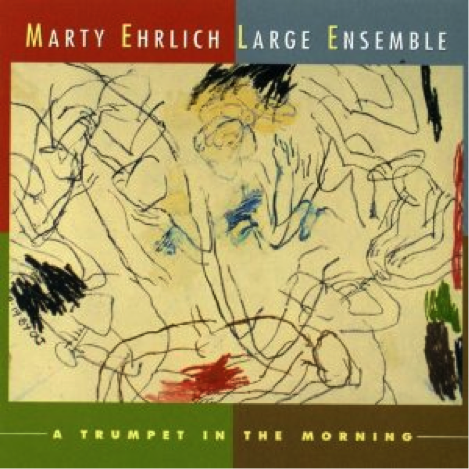 After so many releases with a wide variety of small groups, this is Marty Ehrlich’s first genuine “big band” disc, and it certainly lives up to expectations.  Most of the pieces here evolved out of earlier works Ehrlich composed for his previous recordings; the main advantage here is that with a larger band Ehrlich has access to a much larger palette in bringing them to life.  I won’t list all of the stellar personnel Ehrlich’s lined up for this record, although with folks like James Zollar (trumpet), Ray Anderson (trombone), Uri Caine (piano), Drew Gress (bass), and Matt Wilson (drums) on board, it’s a noteworthy collection of players.  Interestingly, Ehrlich himself doesn’t perform on the record, as he’s focused exclusively on conducting the group.  So we don’t get to hear Ehrlich’s multi-instrumental brilliance, whether on clarinet, flute or saxophones.  But that matters little, really, given that the overall quality of music here is so outstanding.

The range of emotions and moods Ehrlich is able to capture is the first thing one notices with these pieces.  Ranging from jubilant and boisterous full-bore ensemble blasts to subdued and somber hymn-like passages, these pieces manage to challenge and inspire at the same time.  The record is essentially built around four lengthy, involved compositions that put ensemble partnership ahead of individual blowing.  These four selections are bookended by two relatively brief versions of “Agbekor Translations,” a wonderfully catchy African-inspired and supremely danceable track that reminds one a bit of Ehrlich’s Things Have Got to Change record with his Rites Quartet, although with an even stronger and more irresistible low-end due to the peerless tuba playing of Joseph Daley.  From the very beginning, these guys make clear that this is going to be a joyous and life-affirming record.  The engaging rhythmic foundation of this cut simply grabs you and refuses to let go until you start to move!

Of the four main pieces, the title track is really the showcase for Ehrlich’s use of color and texture in developing the potential of his large band.  Centered on a poem by Arthur Brown, this 23-minute extravaganza features an outstanding recitation of the poem by J.D. Parran, who brings just the right amount of spirit and defiance to a track which celebrates struggle and liberation.  Rather than dominating the performance, Parran’s narration comes in at perfectly timed moments to complement what the musicians are doing.  One can hear the distinctive Julius Hemphill-inspired voicings that have typically been integral to Ehrlich’s compositions, and the melodic core of the piece is always present, even during the more complex ensemble passages.  Moving from despair and adversity to hope and triumph, the trajectory of this piece captures something truly profound, and it’s worth repeated listenings just to gather in the subtle nuances and flavors that Ehrlich is able to draw out of his colleagues.  Also of note is the tour-de-force fourth track, “Rundowns and Turnbacks,” another twenty-minute piece that comprises seven segments, all with very different styles and moods: from the bluesy bounce of “Rundowns” featuring excellent slide guitar work from Jerome Harris, to the gorgeous chorale-like interlude of “This Graceful Waltz,” to the somber beauty of “Quaker Work Song,” to the stately march of “Sugar for Sugar,” Ehrlich’s ensemble writing dazzles in its sophistication and warmth.

The other tracks are equally complex, rich, and utterly welcoming.  One of Ehrlich’s strongest qualities is his ability to bring the listener into the music—it’s the sheer generosity of his vision that stands out on this record.  That’s always been characteristic of his writing and playing, but nowhere is it more apparent than on this release.