Imagine to get this in your mailbox. A self-assembled 24-page booklet with original items stuck on it, with handwritten parts, gift wrap pieces glued on the cover, a little dried flower - a real one stuck on the cover, all assembled by the artist himself. The content of the booklet is an amalgam op poems, self-made drawings, handwritten explanations in tiny scribbles on some of the songs, crossed out lines, and bizarre, surreal and absurd, or even scary drawings.

The artist at work here is Joachim Badenhorst, Belgian clarinetist and saxophonist, a musician whose talent no longer needs to be expanded upon, a citizen of the world who studied in The Netherlands, worked in New York for several years, back in Belgium now, with plans to move abroad again. And as gifted as he is, so is his music his own too, with an inventiveness and creativity that makes him do things that few people have done before, exploring even beyond what you might expect, delivering totally different albums recently, one with John Butcher and then a more psychedelic jazz indie-rock avant-garde adventure with his Carate Urio Orchestra.

This album is his second solo album, on clarinet and bass clarinet, after "The Jungle, He Told Me ..." and it is a beauty. Badenhorst is a real poet, a true artist, whose music has a fragile but daring quality, one that is full of questions and surprises and joy.

The first track, "Falret", sucks you into his universe of dreams and fantasy, with an undulating phrase, full of light and brightness, like an ode to sunrise, but then the second track, "The Trembling Something", consisting of electronically altered clarinet sounds, draws you into the opposite world, one of agony and darkness, moving on to "Zon", on bass clarinet, a stunning piece of low vibrating sounds around a single tonal centre, with multiphonic expansions without relinquishing the core.

"Wormhole" is a magnificent circular breathing piece, so repetitive with minor alterations that it could almost be a Philip Glass composition, with slightly shifting rhythms and melodic patterns. The title track starts with a minute and a half of silence, out of which a hesitating theme emerges, again as light as a breeze, with cautious variations offering each note its true value. "Een Zondagochtend In Delft", starts with muezzin-like chanting evolving into again the lamenting vibrations of the bass clarinet, full of longing and deep emotions, and it ends full of calm resignation. One track, called "This Is A Duo With Gerard Herman", is what it says it is, the only non-solo performance on the album.

Then the album ends with the phenomenal "Handsome Eyebrow", one in which the clarinet resonates from a distance in a huge room, and Badenhorst's art comes to a spectacular high level, with beautiful spontaneous and fragile melodies that change like Bach chord progressions, soaring, singing, contemplating, feeling, calming down, repeating, deepening, with changes, with a clarity and warmth of tone that will make most - if not all - clarinet players jealous ... and then this dissolves into silence, for a full six minutes, until a recorder and an accordion destroy the entire solemn atmosphere in a moment of boyish fun, and self-mockery.

Badenhorst's skills, talent and musical ideas are pretty unique, and credit to him for that. He seems totally free, unbound by any obligation to labels (Klein is his own label), insensitive to stylistic expectations (he does what he wants), uninterested in commercial expectations (how many self-collated albums can you sell?), unaffected by his own track record (ready to invent himself each time), untouched by any form of machism (how many men dare be this sensitive?), unlimited in his musical ideas (so inventive) ... and by doing this, letting us all hear something true, genuine, playful, light, and of superb musical quality.

Keep this freedom, Joachim, and give us more of this!

You can listen to the music on Soundcloud. 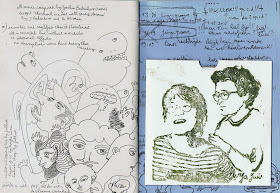 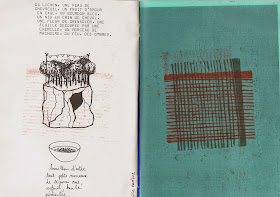