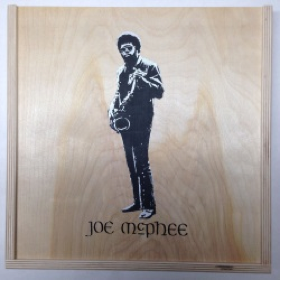 There is no doubt that Joe McPhee is one of the greatest musicians in the field of free jazz and improvisation which is why it is particularly interesting to have a look at his first albums.

Before we have a look at these recording it is necessary to have a look at Joe McPhee’s biography. He was born in November, 1939 in Miami to a family of Bahamian background. As a child, he was taught by his father, who was an amateur musician, to play the trumpet and to read music, so McPhee’s biggest early influence became Miles Davis. When he came to New York City in the mid1960s he played with Clifford Thornton but then he heard Albert Ayler play and was fascinated by his sound.
The legend goes that he borrowed a saxophone and played it the same evening in a gig.

At that time Joe McPhee lived in Poughkeepsie/New York, where he met the painter Craig Johnson by chance in 1965. Johnson worked as a guest-house secretary at a monastery nearby. Four years later Johnson, who was a great jazz fan, convinced McPhee to record in the monastery’s refectory because he thought that the acoustics were so good there. That was the place where they recorded “Underground Railroad”, McPhee’s first album under his name; and in order to distribute the music also CjR (short for Craig Johnson Records) was born, a label for which McPhee released three more LPs, “Nation Time” (1970), “Trinity” (1971) and “Pieces of Light” (1974), before he recorded another four CDs for them: “Remembrance” (2005), “Port of Saints” (2006, “Angels, Devils and Haints” (2009) and “First Date” (2013). The first four LPs were released in very small numbers and were hard to get (especially on vinyl), now Bo’Weavil has managed to make them available again.

And what a real gift it is to listen to this music!

Even at the beginning of his career McPhee disintegrated traditional compositional schemes and freed the instruments of their traditional roles, it was a real emancipatory act, his whole musical approach was modified because he also wanted to make a political statement. Not only was he deeply influenced by Albert Ayler’s expressive and hymnal sound and his spiritual and blues background but he also used African and Caribbean fragments in his music.

All four albums are completely different, which shows one of Joe McPhee’s basic principles: He is rather interested in sounds, once he said in an interview that he collected sounds and that he had always been interested in the nature of sounds, you could even say that he has an architectural idea of sound. Also, you can see his absolute awareness of form which enables him to improvise freely and without bias, as if the music is looking for its ideal form while he is playing.

“Underground Railroad“ (*****) was named after a network that helped slaves to escape from the South to the North and Canada, which existed between 1780 and 1862. In the liner notes for this edition Joe McPhee said that he wanted to make a clear political statement about civil rights and freedom from an historic African American perspective which is why he decided to choose these titles for the album (which is also subtitled „Dedicated to the Black Experience on Planet Earth“) and the single compositions. The band is Joe McPhee (tp, pocket cornet, ts), Reggie Marks (ts, fl, ss), Tyrone Crabb (b), Ernest Bostic (dr, vib) and the title track starts with a drums solo by Bostic before the rest of them get started with pure, excellent free jazz. On the flipside McPhee’s approach changes – another common ground of these albums. One of Joe McPhee’s virtues is not to follow just one idea, instead he offers several possibilities as to music, structure and sound. “Harriet”, the first track on the B-side is named after one of the most prominent figures of the fight for human rights: Harriet Tubman, a former slave who managed to escape and returned several times to the South to help others. The piece is of the utmost beauty, it recalls the pain and the suffering of slaves, and it is full of respect for Tubman’s courage and her achievement. The last track, “A Message from Denmark” is dedicated to a slave revolutionary called Denmark Vesey and it is like a combination of the other two tracks. Moreover, McPhee includes a “A Love Supreme” reminiscence, bowing down in a musical way before the great late John Coltrane as well as Martin Luther King.

McPhee could have established his position with another similar album but according to his credo to depict various approaches he chose to put aside his Albert Ayler and Miles Davis influences to present music which is rooted knee deep in soul and funk, in other words: James Brown. For “Nation Time“(*****) he took Tyrone Crabb und Ernst Bostic from the “Underground Railroad“ sessions and added Mike Kull (piano, e-piano), Bruce Thompson (dr, perc), Dave Jones (g), and Herbie Lehmann (org) to create one of the hottest soul jazz albums ever made. A piece like “Shakey Jake“ presents a certain consolidation as to rhythm and harmony, from which the other two compositions - “Nation Time” and “Scorpio’s Dance” - depart up to a point where beat and tonality almost dissolve. It seems as if the album displays the perspectives jazz was going to offer in the next few years.

Also, for his third release McPhee remains true to his principles and does something unexpected -  on the one hand he returns to his roots but on the other hand he continues to expand the political concept of his music. Even in the titles of the tracks “Trinity” (*****) refers to the holy trinity of the blues (“Ionization”), the New Orleans approach of improvisation (“Delta”) and the Ayler brothers (“Astral Spirits”).

For this purpose McPhee replaced Ernest Bostic on drums by Harold E. Smith and kept Mike Kull on piano and e-piano (actually he also wanted to have Tyrone Crabb on bass again but he decided to quit in order to join politics). Smith added very powerful rhythms and beats to the music, making it sound even more energetic and forceful, which can be heard in the duo beginning of “Ionization”. However, the key track is “Delta” combining free jazz with the beginning of improvisation, blues-like fragments and riffs at the end of the track and a sound that reminds clearly of Albert and Donald Ayler.

Three years later McPhee came up with “Pieces of Light” (****) and once again he proves his ability to surprise. He plays saxes, trumpet, flute, and a Nagoya harp on this album but what is new is that he is joined by Chris Snyder on synthesizer, at a time when electronics and jazz rarely came together. Again McPhee plays with something which is actually irreconcilable, at least at that time, and guides the way for the music to come. Again the titles are symbolic (“Shadow Sculptures” and “Crystal of Light”) with which McPhee combines phenomena of oppositional fields of perception, he focuses on an synaesthetic effect of music in which sounds become visible. Once again the music is not about the concrete tones and sounds of “real” instruments compared with “unreal” disembodied electronic sounds – it is McPhee who is always interested in varying his own sound.

The LPs were also available in a wooden box set with silk screen back and front, including bonus silk screen prints, and full artwork covers. It was limited to 100 copies only (the box is sold out at the source).

The LPs are exact represses of the original artwork and were actually limited to 500 and still available at absolutely reasonable prices at the label.

My favourite of the four is Pieces of Light. It is such an odd album, strangely peaceful. The synthetic buzz of Snyder overlaps quite beautifully with Mcphee's overblowing and multiphonics. I would love it if Hat Hut put out the other Snyder/Mcphee stuff from their Letter Series! Thanks for the review Martin

Thank you, Fergus. "Pieces of Light" is a great album, maybe it is the one which is the most innovative one of all the four LPs. There has been a lot of progress especially in this field of music which makes it sound a little bit less great than the others, it looks as if time has taken its toll. But still, it's also a must have.