Yesterday we posted a review of Akira Sakata and Giovani Di Domenico's Iruman. This weekend, we are taking a deep dive into more of Sakata's recent works.

Saxophonist Akira Sakata is a legend! From the 1970s to the 1990s it was pianist Yosuke Yamashita’s trio with him and Tateo Moriyama on drums which rocked the free jazz scene, particularly with spectacular performances at the festivals in Moers, Berlin, Montreux and Newport. Among others, their albums “Clay” (Enja), “Frozen Days” (Crown/Panam) or “Chiasma” (MPS) are absolutely recommendable. Sakata has played with the crème de la crème of jazz like Herbie Hancock, Sonny Sharrock, Peter Brötzmann, Ronald Shannon Jackson and Bill Laswell, but also with DJ Krush, Jim O’Rourke and Chris Corsano. All in all he has released more than 100 albums.

Fortunately, 69-year-old Sakata seems to be in good shape and has been touring and recording a lot recently. Last year he played the Berlin A`larme! festival with Michiyo Yagi (koto) and Tamaya Honda (dr), which was definitely a highlight of the program. It was a pleasure to see how Sakata, a very short but elegant and noble appearance, was roaming the location, and how happy everybody seemed to be seeing him. 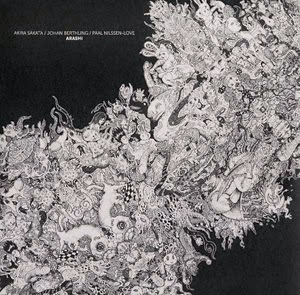 On this album you can hear what a champion Akira Sakata is on the alto saxophone, his main instrument. The first track, “Arashi (Storm)”, presents a rather tender and reluctant Sakata, who is backed by Norwegian first class drummer Paal Nilssen-Love and Fire! bassist Johan Berthling on double bass. But after only two minutes Sakata accelerates like a middle-distance runner in an Olympic final realizing that the tempo is not fast enough for him. This is classic high energy free jazz on an absolute top level, it seems as if all the three players have gone completely mad and angry. It is a relentless force of nature coming over you, it is –literally – a storm. All Brötzmann and Gustafsson fans will love it.

If you think that this could go on for the rest of the album, Sakata will surprise you – because on the next track “Ondo No Huna-Uta (Rower’s Song of Ondo)” he does what he is also famous for: He sings. Actually he gnarls, shouts, growls and barks, always being at the top of his voice – which is the greatest thing there is, because his voice seems to dance over Paal Nilssen-Love tumultuous attacks. If Yamatsuka Eye and Mike Patton listen to this piece they will get down on their knees.

And as if this wasn’t enough, Sakata has a last trump card on “Fukushima No Ima (Fukushima now)”, the final track: He plays the clarinet. And there is a tenderness and sadness to his playing which is almost heart-breaking, like a lament for the nuclear disaster which took place three years ago. It is a side of Sakata which he also presents on his album with Giovanni Di Domenico.


Listen to some excerpts here and available from Instantjazz.com.