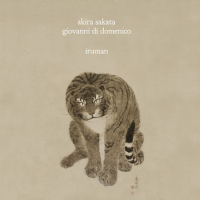 Akira Sakata has been a standard bearer for free jazz in Japan for over forty years.  Giovanni Di Domenico, thirty years younger than Akira, is an Italian born, Cameroon raised pianist who operates in both improvised jazz and classical worlds.  Together they form a remarkable duo.  Akira has a deep, full bodied tenor sax sound, and Giovanni's percussive and classically informed playing (his influences stem from both Italy and Cameroon, where he was raised) complement each other in unexpected ways, tempering each other's moods, or fused together as one in their improvisations.  Their collaborative effort,  Iruman, is an outstanding work that inhabits both Eastern and Western cultures, deeply spiritual, and very creative.

Outstanding tracks are "Bud I" & "Bud II"  (a reference to Bud Powell?), two blistering tracks that pulls and twists the listener's ears like taffy.  Akira fills a lot of the space with his bold playing, inhabiting the middle to lower register, while Giovanni's piano does the upper, and it is the progressive changes in the tracks that makes it interesting.  There is a high level of playing, as the improvisations are well conceived and executed -- one is always surprised by the changes in mode and mood.  "Lotus blossom in an old pond" is a classically influenced chamber piece, a mixture of late Eric Dolphy and early Chico Hamilton.

Two of the most interesting tracks are when Akira uses vocals instead of his sax; "Papiruma" and "Voice from a temple," which are very theatrical; Akira's utterances like in Noh theater, mixed with chimes and a percussive piano accompaniment.  One should note that the titles for each track really do convey conceptually the music performed.  On the final track, "Yellow Sand blowing from China," they are able to convey the winds with a rolling flow of notes, undulating, hynoptic.  Iruman is a successful duets album, conceptually strong and expertly executed.

Di Domenico's duets with Alexandra Grimal
on the album Ghibli are superb. It's an album I frequently return to.

I was listening to some music of Sakata's recently. He's also just released an album with Johan Berthling and Paal Nilssen-Love and I really liked his playing.

This should be a good one.

Apologies, it is alto. Not enough coffee in the morning....

Theres no such thing as enough coffee in the morning!

Some other recent-ish Sakata releases worth checking out are