Fushitsusha & Peter Brötzmann - Nothing Changes, No One Can Change Anything, I Am Ever-Changing Only You Can Change Yourself (Utech, 2014) *** 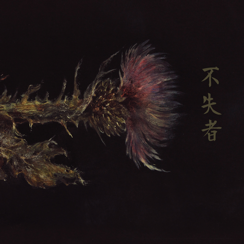 For the Enjoy Jazz festival in 2008 Peter Brötzmann’s Full Blast trio - a mind-blowing hardcore band itself – was augmented by Peter Evans, Mars Williams and Keiji Haino, who added even more power and brute force to the original line up. As you might imagine the audience was packed with fans who knew what to expect when Brötzmann hits the stage. But even for quite a few of them it was too much when Keiji Haino started playing (or rather attacking) his guitar and shouting into the microphone – some just left the gig. It was a borderline experience, painful but also challenging.
So I was pretty excited when Utech announced to release a 1996 recording of a full concert (three CDs!) by Haino’s band Fushitsusha, which consisted of bassist Yasushi Ozawa and drummer Jun Kosugi plus Brötzmann on reeds. But, frankly speaking, it is an ambiguous album.

Particularly disc one is really strange, it starts with erratic, lost single snare drum notes and chiming bells as if it was part of an amateur, soundcheck-like spiritual introduction to the show. It takes twelve minutes (which is really tiring) until Ozawa joins Kogusi with his distorted bass guitar – however, the music still seems aimless, as if you were listening to one of these boring solos of early 1970s rock bands when they allowed bass and drums to step out into the spotlight. Only after 20 minutes the full band is finally ready, led by Haino's guitar and spaced out voice and all of a sudden the music gets much more focused. Fushitsusha is a free rock band in the tradition of the Stooges’, Jimi Hendrix’s and Sonny Sharrock’s excursions into freer regions and the second part of the first CD proves this, it is a huge feedback rock orgy, monotonous, massive, meandering, and 40 minutes long.

Brötzmann joins the band on the second disc but before he does that  Fushistsusha presents a 17-minute art rock performance - “Layer Upon Layer of Missing Answers” – that tries to beam Velvet Underground’s “Sister Ray” to the end of the 20th century. Only then “Swirl in Circles Speaking to me” introduces the great saxophonist with one of his typical solos which is backed by tribal chanting which sometimes sounds like bomb alert. “Still You Ask Why?” they say” propels the music into a hellish sound world, with Haino’s vocals becoming more and more frightening when he battles with Brötzmann’s sax. Moving towards an almost funky structure led by Brötzmann’s sax and then in a duet with Haino’s guitar, the music switches to become immensely harsh – it’s the best part of the album with the two of them together playing in perfect unison.  Eventually, the performance falls back to a more relaxed, rather cool-jazzy sounding piece which leads to the first piece on disc 3, “Now Able to Know Fear”, where the quartet continues this rather melancholic approach, Brötzmann just adding calm clarinet notes. Drums and bass only intersperse weird bell sounds and reverberating Bill-Laswell-like bass notes, Haino sings meditatively –compared to the rest of the album this is ambient music - before Brötzmann takes on the sax again and in combination with Haino’s guitar the atmosphere gets a bit rougher again. The piece is a welcome change to the furor the band has delivered so far before they indulge in the storm again. On “Can We Become More Exalted Than the Gods?” they switch the whole thing to a very heavy and deep blues rock drone which sounds as if Blue Cheer were jamming with Sonic Youth and The Swans and with Haino’s voice squealing and mewling like a starving animal, until “Since They Have Stopped in Place” ends the concert – a classic garage rocker, bumpy and psychotic.  The closing minutes drift into free jazz again since Brötzmann joins the band for a final outbreak.

As a conclusion, Nothing Changes … is a bit too much. It has its moments, especially the ones with Brötzmann - whenever he joins Fushitsusha it reminds of the great Last Exit. The best moments on one CD would have been a great release. All in all, I would only recommend it for die-hard Brötzmann fans. For fans of Fushitsusha it is a must, I guess.

Nothing Changes, No One Can Change Anything, I Am Ever-Changing Only You Can Change Yourself is a three-disc, three-hour document of a single epic concert, recorded at Tokyo’s Hōsei University on April 26, 1996 and has been mastered by James Plotkin. The tri-fold booklet includes liner notes by Alan Cummings. It’s being released in a limited edition of 1000 copies.

Annotation:
There are song titles listed but each disc is indexed as a single track, so you have to guess which track is which.

One of the most difficult albums I own is Brötzmann and Haino's Evolving Blush 0r Driving Original Sin, which I believe was recorded during the same time period as this release. Honestly, I don't like it much at all, but keep it because of its rarity/value.

Concert took place in an "occupied" space of Hosei university in Tokyo, the building has since been seized back and demolished. Special location adds quite a lot to the feel of this live moment.

You're quite right, it is an absolute must for Haino/Fushitsusha devotees. And if, like me, they are also Brotzmannites, then the album is like every Christmas come at once. The CDs, by the way, are beautifully packaged and the whole thing feels just a bit special.