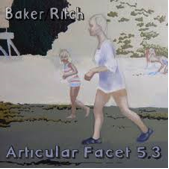 I was unfamiliar with Sarah Ritch until encountering this recording, but Jim Baker is someone whose work I have admired for awhile.  Basing his subtle explorations around the keyboard - specifically, the piano and an old school analog synthesizer with a large patch-board attached to it – Baker excels at adapting his own particular, and never obvious, ideas to his collaborations.  His most accessible gig is a weekly performance with Extraordinary Popular Delusions at the Beat Kitchen in Chicago.  He also released a brilliantly understated solo improvisational recording on Delmark almost ten years ago called “More Questions Than Answers” that is still available and comes highly recommended.
Ritch is a classically trained pianist and cellist whose work ranges from notated classical composition to improvisational noise.  She was matched with Baker for a performance at the Empty Bottle in Chicago as part of a series of concerts called “Articular Facet,” which happens to be the performance captured on this disc.  I’m not sure if this is their first collaborative effort, but their sonic union is certainly worthy of this release.  Ritch plays cello, keyboard and guitar for this date; Baker plays his trusty vintage synthesizer.

The disc opens with a synth drone and a bowed squeak that often sounds like a plastic flute.  I have an immediate flashback to the 80s, particularly sound collage cassettes, and specifically to a band called Crawling With Tarts, whose balance of acoustic and electronic sounds – and recordings of nature – I have always found exotic, beautiful, and comforting.  Ritch’s overtones are menacing and sweet simultaneously; and Baker’s washes of synth distortion provide alien counterpoint.

For awhile things get a bit trance-like, with Baker modulating tones over Ritch’s eighth-note march.  It veers into a new age territory for a short while and you’ll empathize with them while they try to find their way out of it.  Eventually they find their way to freedom in the form of modulated guitar feedback and synth bubbles, on which they float out into liberating oblivion.  It takes them over half of the set to reach it, but when they do – it’s game on!   Kinda like Sunn O))) or Boris teaming up with Richard Teitelbaum before riding into Eye Yamantaka’s sun.


See Stef's review of Articular Facet 5.3 / Download the album from the label.