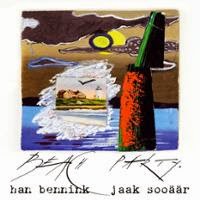 Beach Party is the result of a March 2012 concert of percussion legend Han Bennink in a duo format featuring Estonian guitarist Jaak Sooaar.  They have a fairly rigid format for a couple of free wildmen, which is “let’s have a bunch of fun and improvise until we feel like playing a standard we both like.”  You’d have to be a real party pooper to not have a good time here.

It is a thrill to hear Sooaar playing without a bass line in the way, sounding a bit like Sonny Sharrock doing Charlie Christian on “On The Sunny Side Of The Street.”  They follow this up with another improvisational outburst that rolls into “I Got Rhythm” with a Misha Mengelberg composition thrown in at the end.  Bennink swings like hell and is his usual entertaining, brilliant self; while Sooaar’s playing has a sharp rockist edge to it, matching Bennink’s carefully reckless choreography with enough well-placed distortion to make the Zappa nerds cry.

“Tartuu Marss” is an Estonian traditional piece of music that is preceeded by a bit of early 70s Miles wah-wah stomps.  Bennink is definitely in his element.  They manage to smash two composed pieces together, matching Monk’s “Pannonica,” on which Sooaar plays gorgeously, with the lone original composition here, the funky butt-kicking “Beach Party.”  They attack “Darn That Dream” in total free-jazz mode, which in breaking the improv/standard formula becomes a bit of a mash-up.

Not surreal enough for ya?  They play “O Sole Mio” with a straight-ahead groove that somehow comes off sounding like the White Stripes!  This is followed by a monster freakout that leads into another Estonian standard called “Pistoda Laul,” a beautiful piece of melancholia.  Short Attention Span Theater possessed by genius.