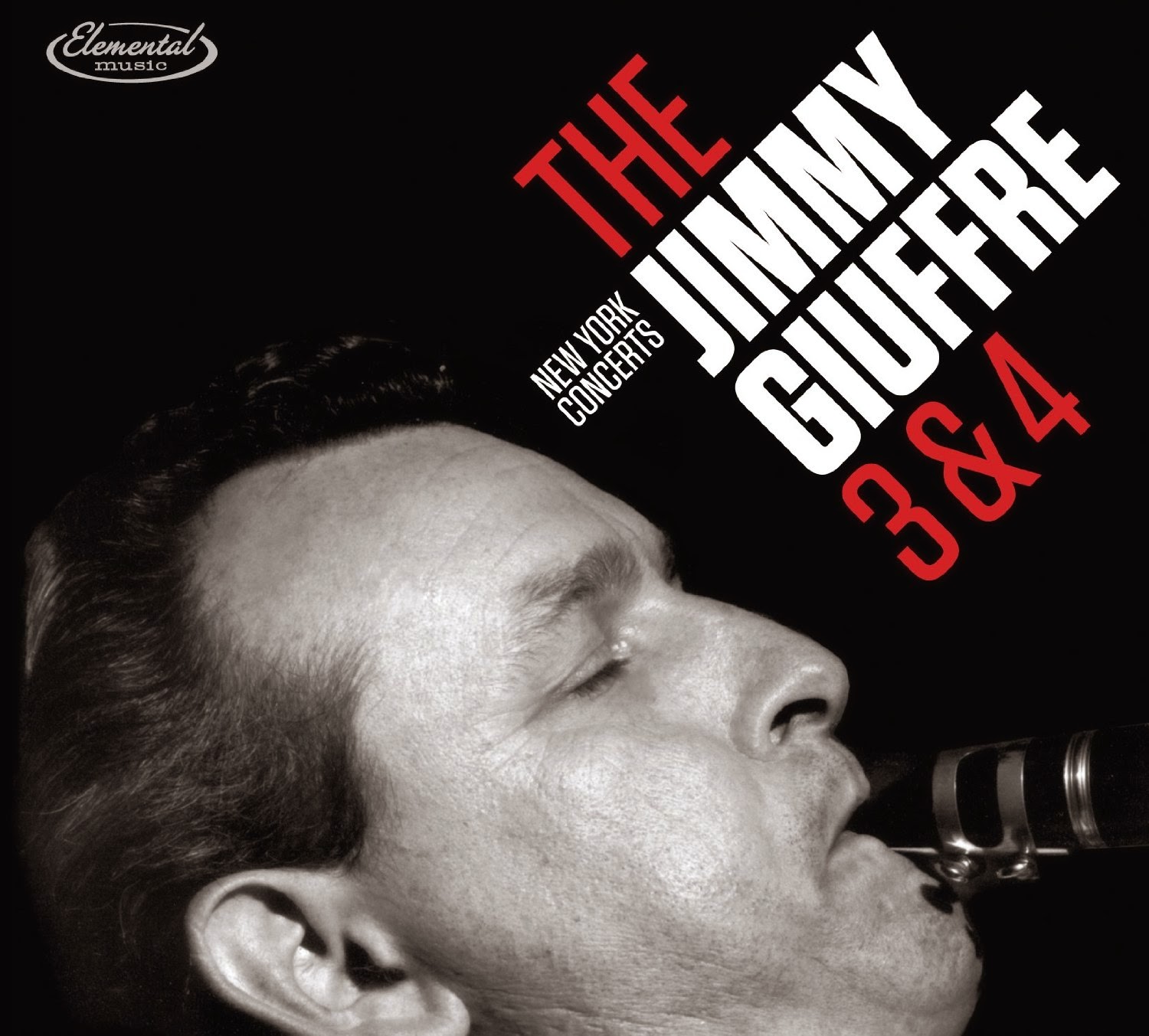 There are reissues that can reintroduce a body of work to a new generation of listeners, and then there are reissues that completely alter established musical history, of an artist and a genre. Jimmy Giuffre 3 & 4's New York Concerts fall into the latter category. It is a 2-disc set comprised of two concerts in 1965, during a stretch of 7 or 8 years where there has been no recorded documentation of Giuffre's work.

The 1961 sessions, "Fusion" and "Thesis," originally recorded on Verve and later reissued by ECM, were considered landmarks of early free improvised jazz, brilliant works of group interplay and of space, using silence as an essential part of the music. With Paul Bley and Steve Swallow, the drummer less trio was structured in such a way as to be forced to be more interactive with one another, emphasizing counterpoint. On the New York Concerts, the drummer is back, with Joe Chambers, who was already making a mark for himself with his excellent collaborations with Bobby Hutcherson on Blue Note. Richard Davis replaces Swallow, and this trio, recorded live at Judson Hall, explodes where the earlier trio shimmers.

"Syncopate" is jaw dropping, as Giuffre unloads, with terse and weighty interplay from Davis and Chambers, a fierce torrent of notes that is unexpected as it is aurally exciting. It's short of sounding like Brotzmann, more lyrical, but it carries tremendous weight. Chambers is equally brilliant here, accenting the notes with a brief machine gun flurry, and Davis darting in between both musicians with notes that emphasize the space where the others don't inhabit. It is one of the most riveting and intense compositions I have heard from Giuffre. "Crossroads," an Ornette Coleman tune, again shows Giuffre's dexterity and fluidity, driving through the complicated series of notes with ease, even better than Coleman himself. He squeals and squawks with an intense focus, never overblowing, but in decidedly chosen moments that emphasize a positive and negative space. Chambers responds with thundering drum rolls, and Davis again provides an essential point of focus, providing a link between the sound and silence with accented notes, not so much providing rhythm but atmosphere. "Drive" is more boppish, with Giuffre providing a strong lead, moving from sweet notes to harsh atonal bleats, with Davis having counterpoint with a soft but intense solo.

The second disc is from an earlier date of the same year, at Columbia University. Joe Chambers is still on drums, but Giuffre is accompanied this time with Barre Phillips and Don Friedman. Four of the six tracks are similar as on disc 1, but the interaction is different, mostly because of Friedman's inclusion. On "Syncopate," Friedman's piano echoes and plays off of Giuffre's lead, then going off on his own, at times percussive, others very freely played, similar to his musical explorations on the Prestige albums at that time (think "Metamosphosis" & Dreams and Explorations"). The leader baton gets passed between the two, with Chambers continuing to provide a heavy accent on drums when needed. Phillips is less compelling than Richard Davis, perhaps because the dynamics of the group are different, but is still effective. The moments when the group explodes into free improv are breathtaking, because they are so brief, but the power is there. "Quadrangle," twice its length here than on disc 1, is a highlight on the set, an excellent work that exemplifies Giuffre and his group's use of silence and space, where four musicians interact, pull apart and play separately, then return. Phillips' playing is at best here, plucking and bowing at times to really give the listener a sense of atmosphere, tension, and placement between the musicians. "Quadrangle" flows right into "Three Bars in One," another long tune which takes the statement made from the previous piece and shoot it into the stratosphere. On "Cry, Want," Giuffre plays clarinet, and, while no one will mistake his sound for Eric Dolphy's, is introspective and as freely played as anyone from that time. It anticipates a wave of playing done in the 70s and later decades. Again, the dynamics are mostly between Giuffre and Friedman, who trade off tonal and atonal notes as if having a conversation. "Angles" showcases a lot of percussion from Chambers, who drives the others to a fast pace, with the others taking quick pauses then firing off salvos of notes at each other.

New York Concerts is an incredibly valuable document, not only for the artist, as it fills and informs a big gap in his recorded discography, but also how Giuffre anticipated a style and dialogue of playing that informed and influenced generations of free improvising musicians that followed. This easily is the reissue of the year, and gets my highest recommendation.


You can buy this album from Instantjazz.

Excellent review. The later reformed trio of Guffre, Bley and Swallow never quite reached the heights of the earlier incarnation, possibly because Swallow had switched to electric bass, and I've always much preferred his playing on acoustic bass.

I have to say I didn't know that Guiffre did some stuff with drums, wow. I have plenty of the trio's music (early version and later one), but this must have slipped by me. Great...looking forward to hearing this.

Yes, nice review. And if I may point out, this is not reissue, but rather first publishing of these two splended concerts.