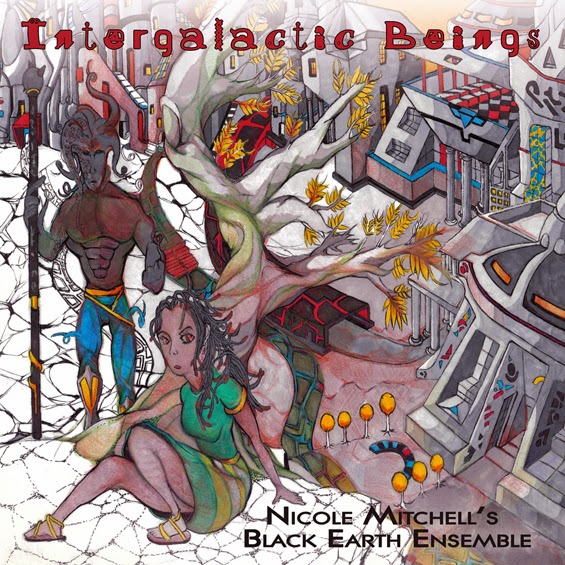 The mission statement for Nicole Mitchell's Black Earth Ensemble "is to inspire the human spirit with thought-provoking beauty and to present a positive, healthy and culturally aware image of African Americans", the group having been named Black Earth to "honor the feminine source that our lives depend on—Mother Earth." Intergalactic Beings manages to both achieve this goal and present an alternative vantage point to consider these ideas. Inspired by the science fiction writing of Afro-futurist author Octavia Butler's 'Xenogenesis' novels, Mitchell's second suite based on these texts seeks to "express the perspective of intelligent extraterrestrials that look with horror at our human contradictions", and tells a journey (both physical and emotional) of "a lone woman in this strange place far from Earth".Mitchell is best known as a flautist, regularly topping Downbeat's Critics Poll, her command of her instrument (C, Alto & Bass flutes in addition to piccolo and occasional vocal contributions) has seen her figure prominently in ensembles led by Anthony Braxton and Rob Mazurek, as well as leading her own groups. However, on Intergalactic Beings it is her compositional strength which takes centre stage.

For this recording (captured live April 30, 2010, at the Museum of Contemporary Art in Chicago) the Black Earth Ensemble's ranks are swollen to ten, the only personnel changes from the first Xenogenesis suite are the addition of Renée Baker on violin (from Mitchell's Black Earth Strings), and Jeff Parker on guitar replacing Justin Dillard (piano). In contrast to the positivity usually associated with her writing for the  BEE, Xenogenesis II deals with some bleak subject matter, often utilising dark and brooding sonance to frame the tumult of the story. The resulting suite is almost Third Stream, albeit with the incongruous palette of a post-Cageian sound world, rather than Schuller's sweeter conception. Mitchell's command of instrumental voices at times feels like Gil Evans twisted by pernicious forces, although tempered by a sense of hope and wonder. The recording comes with supporting text detailing the events portrayed, and whilst this is illuminating to the listener it is by no means required reading. The music stands on its own merit, the words providing further context from which to consider the suite, rather than a crutch required to support it.

Whilst much of the piece is through composed, there are areas within its structure for group improvisation, although within a predetermined sonic framework. When the occasional solo does occur, such is the strength of the compositional narrative that the lead voice sounds like an extension of the narration, rather than purely that of an individual. Clearly the long standing musical relationships Mitchell has with each musician ensures that their voices are ideally suited to her compositional style (it isn't a stretch to suggest that passages have been conceived with that particular musician in mind, rather than just their instrument), and in turn an awareness of the aims of the composer is readily apparent in the suite's more improvised areas, although individual brilliance is always afforded its place. Throughout the instrumental colouring is as central to telling the story as Mankwe Ndosi's often wordless vocalese, careful combinations and interplay rendering the emotional complexities of the subject matter through the creaking of a bass clarinet, rummaging percussion or ring modulated guitar. Mitchell's writing for  strings is particularly affecting (she began life as a viola player), and her use of interconnecting themes and instruments brings the cinematic best from the ensemble.

Whilst Mitchell's Xenogenesis works utilise ominous overtones which are not a facet of other BEE recordings, there is nonetheless an adherence to the idealogical foundations of the group. An alternative perspective of 'Mother Earth' is offered, holding a mirror to the ruinous potential of a dystopia future we appear to be walking blindly toward (a concept common to much science fiction writing). However, it is the sense of wonder and the resilience of the protagonist which best realises the BEE ideas of positivity. In the engaging musicality of this lovingly rendered composition there is much to "inspire the human spirit with thought-provoking beauty."