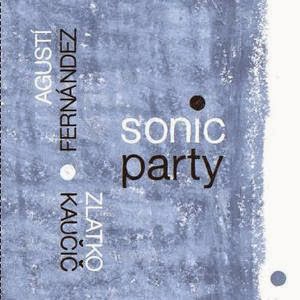 Sonic Party continues Not Two’s recent documentation of Slovenian percussionist Zlatko Kaučič, this time in a duo with the formidable Agustí Fernández. Kaučič has been an established presence throughout Europe since the 70s, though his recorded output has really only picked up in the last decade or so. This is a happy development: Kaučič is a wildly creative player with an nearly endless array of clicks and dings and patters. On Sonic Party his rapid articulation—at times not unlike drummers such as Paul Lytton or Raymond Strid—is well-matched against Fernández’s frantic stream of ideas.

The album opens with two pieces of traditional (for lack of a better word) free improvisation: blistering runs on the piano and flying hands and drumsticks. “Sonic Party” steadily accelerates until it’s difficult to believe Fernández’s fingers will stay attached to his body. At its boiling peak, it levels off into a expanse of ringing notes, which eventually dwindle to silence. What’s never lost on Sonic Party is a gleaming clarity, no matter how much steam it picks up.

But for all the clattering, roiling pieces of improvisation, the duo forms the strongest bond when the pace is slowed down and Fernández enters the interior of the piano. On “Lonci” and “Mondze,” his preparations and experimentation with dampening and stretching the piano strings bring him much closer to Kaučič’s sonic wheelhouse, and the two blend into a single sound source, one that eventually builds into a thundering, frightening ambience that threatens to overwhelm the senses.

“Sirob” begins with a long Fernández solo that swoops and circles around an insistent dance of two notes. He’s soon focused on a cluster of high notes, which sound wistful and serene after the preceding tumult. But when Kaučič finally enters, the tone changes dramatically: suddenly what’s conveyed isn’t tranquility, but great tension. It’s a remarkable lesson in context and the ways small musical decisions can powerfully redirect a performance. “Free Nest” is yet another reminder of the force Fernández can generate with his piano: like a crushing vacuum, he can suck all the air out of the room. The piece ends abruptly in full crescendo, and a few people chuckle nervously in the audience, breathless and overwhelmed.

“The Hug” closes the album with an intense workout in the lower octaves of the piano, like arms wrapped around you that are slowly squeezing tighter and tighter. Eventually the grip loosens—it was all in good fun!—and the performance ends with faint cymbals and the soft clicking of keys, the piano strings no longer making a sound. It’s a nice encapsulation of what Sonic Party represents as a whole: a virtuoso stroll through the halls of improvisational history, from the most raucous free jazz to the lightest of reductionist touches.