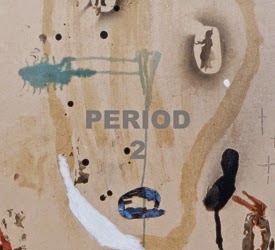 Period really facilitate the music scribe’s task of finding a good starting point, since the impressive musical credentials of everyone involved provide a more or less self-evident jumping-off point. Formed a couple of years ago by ubiquitous drummer Mike Pride and guitarist Charlie Looker (formerly of Extra Life, a band that is more or less unclassifiable but very highly recommended), Period have become a more band-like proposition over time, as vocalist Chuck Bettis (formerly of noisy punks The Meta-Matics and Tzadik recording artists Brown Wing Overdrive) has joined them. On this new album – yes, it’s the second one –, the trio is expanded into a quintet with the sometimes addition of Sam Hillmer on tenor sax and Darius Jones on alto saxophone, both of which have an impressive pedigree of their own: Hillmer as the bandleader and sole constant member of Zs (also unclassifiable – although “chamber-rock” might give you a pretty good idea – and very highly recommended), Jones as both a sideman – for William Hooker, among others – and as a composer with the noise-jazz group Little Women (do I need to mention that they’re highly recommended?).

So, yes, this is a super-group of sorts, and if I had to judge this album on past achievements alone, I’d award five stars and be done with it. Indeed, in terms of musical style, 2 has the fingerprints of Period’s members all over it, with an overall approach that draws on various avant-jazz and avant-rock sub-genres also mined in the better-known projects of the five musicians. On top of that, there’s a distinct punk/metal feel present in many of the album’s tracks. Alas, the considerable talent behind this record isn’t always translated into the expected greatness. Opening track Two is a case in point in this respect; it sees Looker (on baritone guitar) and Pride improvising without assistance from the other members. For almost 17 minutes, they’re propelled by a stoic, pummeling beat – the sort of beat Swans have built almost their entire career on – with Looker injecting his trademark “ice-pick” riffs and Pride indulging in hyperactive fills. Since this is basically an improv project with different premises, it may seem a bit unfair to compare this to Looker’s old band, but at the same time, it’s hard not to – the similarities are there. While quite powerful, it ends up sounding more like a sketch of an as yet unreleased Extra Life song than genuine improvisation.

Period fares better when Jones and Hillmer provide back-up. On album highlight Nine – which is actually the fourth, not the ninth track – they help steer the band into a more unhinged avant-jazz direction by adding ear-splitting dissonance and employing some extended techniques. Alongside Bettis’ creepy howls and growls, this adds up to a monstrous track that recalls Painkiller in its bludgeoning intensity and metal experimentalists Kayo Dot in its scope.

In general, intensity is the album’s main redeeming quality; at times, it makes critique of the record’s flaws seem almost ridiculous. Still, the band is seemingly at a crossroads, caught between a tendency towards constructing (quasi-)songs and an inclination to reckless improvising. All told, it’s a good, if somewhat flawed record and hopefully a harbinger of great things to come.

Listen and buy at the label’s homepage.