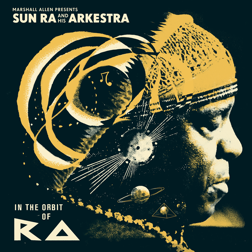 “I have many names. Some call me Mr. Ra, others call me Mr. Re. You can call me Mr. Mystery”, Sun Ra said in the documentary “A Joyful Noise”. It might be true, that Ra has remained mysterious all his life considering his philosophy but as to his music many of the elements of his music have been displayed very clearly from the late 1950s until the end of his earthly existence – there has always been a stringent musical and philosophical vision in his art.

Pushing this into the spotlight on this compilation is Marshall Allen’s biggest credit. There is no one like 90-year-old Allen, the man who runs today’s Arkestra, who has a deeper understanding of what Ra’s music is about, so it is interesting how this album is compiled. The individual tracks are not in a chronological order but rather emphasize the mystical, magical, ritualistic and afro-futuristic elements of Ra’s music. Allen has chosen many tracks with vocals and flute solos, which puts a clear accent on the African roots of the music. And in addition to the percussive hellfire which has always been an essential element in Ra’s music, there is something else: Especially on the first CD Ronnie Boykins’s and Ben Henderson’s bass is excellently re-mastered and highlights what a driving force it was in the band’s playing. Tracks like Spontaneous Simplicity, Plutonian Nights, Angels and Demons at Play and Island in the Sun (in a marvelous extended version which was previously unreleased) develop an even more hypnotic groove than in the original versions, there is a real trance-like relaxed danceability to all these pieces. And danceability is the main topic on the second CD with relentlessly pulsating tracks like Dance of the Cosmo-Aliens (from his underestimated “Disco 3000” album) or almost laid back ones like The Nile or Ancient Aiethopia.

“In the Orbit of Ra” also includes a previously unreleased live acoustic piano version of Trying To Put The Blame On Me from a 1977 show in Rome and a real monster version of Astro Black ( released on Impulse in 1973) which bring the compilation full circle and back to the recordings from the Arkestra’s beginnings.

Although most of the music has already been released before, “In the Orbit Of Ra” is not a plain “Very Best Of” compilation. It is an essential for fans because of the extraordinary sound quality of the tracks but also an excellent start for Sun Ra beginners.

It is available on double CD (even a vinyl addict like me recommends this version because it includes seven more tracks), double LP and as a download. LP and CD include a full interview with Marshall Allen along with rare and previously unpublished photos by Val Wilmer.

Listen to Angels and Demons at Play here: