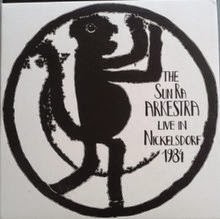 The Nickelsdorf performance is a mixture of jazz classics like Round Midnight, Sophisticated Lady or Days of Wine and Roses, Arkestra hits like Space is the Place, Nuclear War or Love in Outer Space and five untitled improvisations. And it’s these improvisations that show why Ra’s music has been so influential and why the Arkestra is such a monster of a band. It was Arkestra drummer Clifford Jarvis who put it in a nutshell: “The drummer has always played a major part in Duke Ellington’s band; at one time he used to star the drummer. Always he built his music off the rhythms. Sunny’s like to the extreme with it, but it’s the same thing. He likes the drums to dynamically guide you all the way through.”

Already in the first Untitled Improvisation the Arkestra makes excessive use of polyrhythms, a snake charming saxophone solo seems to deliver the background for a real tornado of percussions. The result is a world constantly moving, it sounds raw, unfinished, unstable and fragmented - like a constant work in progress. Untitled Improvisations Part 1 -3, a bundle of pieces on the second CD, rather focus on the saxophones and the bassoon, with the reedists hurling out ferocious blasts as if a hellhound was chasing them. Gilmore, Allen, Thompson, Omoe and Jacson build an indestructible unit of devastating quality, they create a vigor which can be compared to Cecil Taylor’s larger formations.

The Nickelsdorf performance is interwoven by Sun Ra’s threads of electronic sounds as on Carefree, apart from the improvisations another highlight of the album. At that time Ra was still a tremendous force on the keys – and he delivers a lot of solos that are interspersed between larger, more structured songs as well as surprisingly great spare piano passages (as in the opening for Sophisticated Lady).

My personal favorites are Nuclear War, Ra’s comment on the cold war, in which he criticizes the policy of the superpowers after WW II in irresistible call-and-response chants based on a tough grooves (even artists like The Violent Femmes’ Brian Ritchie and Yo La Tengo covered it) and Love in Outer Space, an infernal mixture of African jungle rhythms, Far Eastern stride piano and an Ellington-like ultra-precise horn section.

"Live at Nickelsdorf 1984" is a really wonderful performance by Sun Ra & The Arkestra, it’s a 3-CD set covering the complete 3-hour live set. The sound quality of the CDs is good although the audience is audible here as well (but it is not as annoying as on “Live in Ulm“).
It’s a must for fans and a good introduction for beginners.