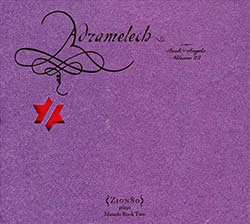 Based in New York City, Zion 80’s mission is to expand the scope and framework of Jewish music and lead it into the 21st Century while paying homage to its forefathers.

If you’re not well versed in Jewish music its melodies have been prevalent in popular music maybe even without you consciously knowing.  Songs like “Nature Boy” and “Strange Fruit” for example are not only written by Jewish writers but contain key elements and structure of song passed down for generations.  What makes the Book of Angels vol. 22 so exciting is that Zion 80 carves out its own identity and territory while at the same time paying respect without hitting you over the head with it and the results are exciting and addictive.  This may be the best played, produced, arranged, conducted, mixed and recorded album I’ve heard in the last ten years.  I’m not kidding.  It’s that great.  Each song will make you tweak your head to one side, enticing you to listen closer, to think you’re hearing something, a note, a phrase, you might have heard before then takes you in a new direction that will both make you smile and titillate the mind at the same time.

For someone like myself, who is ¼ Jewish (yes there are Norwegian Jews; 892 were shipped from Oslo in 1940 to concentration camps by the Nazi’s.  Only 9 survived and returned after the war) these themes have been swimming in my soul for my whole life but you don’t need to be Jewish or have some ancestry to enjoy this work.  Do you like Indian music?  Do you relate to Middle Eastern scales?  Well then, that’s precisely what this is seen “through the lens of Afrobeat” (according to their website).  How this pertains to us here in Free Jazz land is that it’s completely original, wildly inventive, exciting, brilliantly played, passionate and filled with joy.  Lots of joy.  I’ve listened to it three times already for this assignment and I will listen many more times after my fingers are done typing.  I did not know of this group before being asked to write this review so maybe my exuberance is in direct relation to a new discovery but I think not (Disclaimer: I worked with Ms. Lurie on Giuseppi Logan’s 2013 release “And They were Cool…” but didn’t know she was part of this group until I researched them for this piece).

Nothing is perfunctory or forced on this record and the songs, 8 of them in total and perfectly sequenced, are not indulgent with the longest clocking in at just over ten minutes.  They are tight, taut, superbly crafted and endlessly thrilling.  No one takes a solo just because it is time.  When member Brian Marsella takes a superbly creative keyboard turn during the song “Kenunit” it’s not a jazz convention; it takes the song someplace new and ends the song perfectly.  The horns make you want to believe they are improvised as they grunt and howl but in the most musical fashion so it can’t be, can it?  They are too together!  I had a huge smile on my face during all three spins of this record and my wife laughed at me as she found me bopping across our living room floor with the volume cranked.  As a guitarist myself Jon Madof (the leader of Zion 80) and Yoshie Fruchter are my new heroes.  The interplay between them is brilliant and the solos and their tone are out of this world and the bass playing is tremendous.  Shanir Blumenkranz knows just when to kick on (and step off) a fuzz pedal and use phasers judiciously and they add quite a lot to those songs without being distracting or getting in the way.  For an album with so many players and complexities it’s a wonder that there is also a good deal of space on this record.  Nothing feels crammed in nor cramped ever.

If you can’t tell by now you really must get this.  You will not be sorry.  Hopefully, like myself, it will stick with you long, long after the music stops playing.  I can’t recommend it enough.

If we could give an album six stars this would be it.