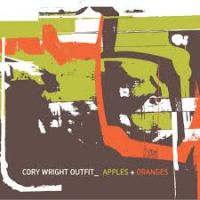 I have to say straight away that this is a new one for me, a great surprise. Singlespeed mentioned in a press release that he was bringing out a record from Cory Wright, unbeknown to me this record was going to blow me out of my chair (the sofa, in reality).

Next, what type of music is it?

What really defines the music on this release is the excellent ensemble playing, combined with beautifully written charts and arrangements, there isn't one duff track on the record. The underlying trend of the music is built on tradition, and in particular that of hard-bop. Yet, the group, and the compositions, take this much, much further. The music develops in an extremely organic fashion, using some intriguing methods, tempo changes, improvised sections and hot fiery solos. The music sits on neither side of the fence, taking in straight ahead and improvised musical traditions. Cory Wright has put together a set of charts which succeed in the same way that the Ken Vandermark Five have tried in the past. Other groups, such as Atomic or Motif, have also pushed in the same direction, combining accessible melodies with alternative ways of soloing over (or with) material.

On this record examples of that can be found from the start Freddie Awaits the Sleepers blasts off the record, a theme that could come straight from the Marsalis song-book (with a difference). Great melody, wonderfully arranged interlocking hits and rhythm section breaks, before letting the soloists play their magic over the whole thing.


That's just the beginning of the record, things keep coming at you! Low Impact Critter (tk2) starts off with some great free blowing before coming together for a theme, using an impro/theme/impro/theme type form, to great effect. St. Bruno's Preview (tk3), gives you a breather, a short 'to the point', quasi ballad. Many of the pieces tread a fine path between total freedom and organised melody, added to this the soloists negotiate each piece, fitting in perfectly. One of the key soloists, Evan Francis (alto sax and flute), plays some very fiery solos, using strong sinewy lines to bring tension to the music. Cory Wright also plays some excellent tenor sax, reminding me of Oliver Nelson at times - a way of playing a sax like a composer. He also plays clarinet on The Sea and Space (tk5), giving us new colours in the ensemble sound, and of course the solos also. But the whole ensemble is clearly top notch, Rob Ewing, on trombone, plays a key role in the ensemble's sound, adding fine imaginative solos along the way. Add to that the fine bass and drums team of Lisa Mezzacappa and Jordan Glenn who do a great job of bending over backwards to fit into all situations with equal energy and inventiveness. The album clearly works best listened to as a whole, the shorter pieces - all titled St. Bruno's .... - work as melodic interludes connecting the larger scale pieces.

Finally, as you can see there's plenty to say about this record. It's a top notch album that should be heard, especially by those interested to hear inventive music from the American west coast. This is how one imagines jazz should be, fresh, musical, adventurous, and certainly no pretensions.

p.s. Although the CD was recorded in 2013, I understood (maybe incorrectly) that the release was in 2014. Anyhow, its a great album, don't miss it! You'll find a nice live video on YouTube, for all interested.

I am always sceptical when I see those five stars sitting there. It is rarely that I concur 100 percent, but this is one time I do. I started out listening and thought hmmmm this is pretty good. That feeling multiplied with every track and then sadly all to soon it was over. Don't miss this one it really is five star worthy.

I (as you can see) found this an excellent release, and a new name for me also. Keep your eyes open for a review (coming shortly) of a French group called ObLik. It's in the same genre and also a definite 5 star discovery!