Wayne Horvitz and The Royal Room Collective Music Ensemble - At the Reception (Songlines, 2014) ****½ 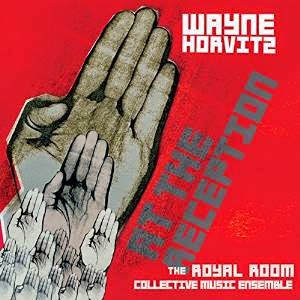 On his Royal Room Collective Music Ensemble recording “At the Reception” - keyboardist, composer and conductor Wayne Horvitz leads a big band through a set of his compositions that involve a great deal of improvisation and are highly enjoyable to listen to, over and over again. The music is collection of themes that long time listeners of Horvitz may recognize from recordings like “American Bandstand”, “Sweeter than they Day”, and the Gravitas Quartet. What sets this set apart is of course the big band setting and the process in which he shapes the music.

In fact, it’s the later part that is discussed in the liner notes. Horvitz begins his notes referencing his work with the late Lawrence “Butch” Morris, who had developed an approach to improvisation and large ensemble improvization that he called “Conduction”. The site “www.conduction.us” offers an explanation of Morris' approach:

Conduction®: A vocabulary of ideographic signs and gestures activated to modify or construct a real-time musical arrangement (of any notation) or composition. Each sign and gesture transmits generative information for interpretation and provides instantaneous possibilities for altering or initiating harmony, melody, rhythm, articulation, phrasing or form.

As Horvitz explains, it was through a deconstruction and reconstruction of the methods that he learned when working with Morris in the 1980s that he came up with his own approach to working with a large ensemble. Unlike Morris, who worked with more spontaneous developments, Horvitz moves around composed sections and has his musicians develop their improvisations through his compositional frameworks. Though his initial work was with high school students, he transferred this approach to more seasoned and professional musicians. This ensemble is currently working out of the Royal Room in Seattle and creating music of wonderful subtlety and contrasting grand sweeps of sound.

After the refined bass intro to “Daylight”, a composition from his rock oriented late 1990's group “PigPen”, the group explodes into  free playing that eventually funnels into a solo by trumpeter Samantha Boshnack. As interesting as the soloists are, the background playing needs to be called out too as it creates an ever changing tapestry of tonality and colors. The track “Trish” is a gorgeous movement of chords shifting and under a pleasant melody. Another highlight is on the following track "Barber Shop," a work Horvitz composed for a Charlie Chaplin movie soundtrack. It features the work of soprano sax player Kate Olson (from the duo The Syrinx Effect, whose other member Naomi Siegel also plays on this recording) and tenor player Skerik, who co-leads the joyful marching band-esque romp. “Ironbound” is a track that features the horn section in making an abstract picture. Broken into a virtual “Side A” and “Side B”, the album continues with a program of music that continues to captivate with an interpretation of Sweeter than the Day’s “Prepaid Funeral”.

At the Reception is an excellent large ensemble recording that doesn’t aim to challenge the listener by pushing them to edge, as it rather engages the listener with the spontaneous arrangements. These interpretations of Horvitz’s music are enjoyable to hear and can easily appeal to listeners beyond the dedicated avant-garde jazz audience. The album’s appeal grows more on each listen as new musical details emerge. 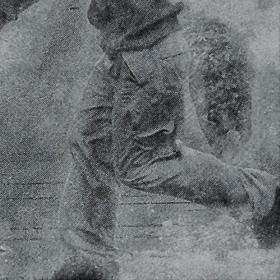 When you pick up the LP of Wayne Horvitz's 55: Music and Dance in Concrete you may be struck by its austere beauty. The image, the booklet, the sound, all work to re-create the location of the visual and acoustic properties of a circa-1900 Fort Worden in Port Townsend, Washington, nestled amongst the temperate rain forests, jagged Olympic peaks and cool waters of the Strait of Juan de Fuca. The album cover depicts concrete like the bunkers of the fort, and the LP size insert booklet sports a cover of a dancer, bathed in blues, reds and greens. The printed booklet captures a bit of the multi-media project it represents.

The music is modern classical and “modular”, composed out of short tracks that when downloaded from the internet (the LP contains a sampling, the download card several more) run from a minute to no more than four. According to the liner notes, Horvtiz composed 55 short pieces, and then additionally recorded 55 improvisations with a chamber group at the fort, and from these 110 pieces constructed the music that would then be later performed to dance choreographed by Yukio Suzuki.

The music is impressionistic and evocative, and it is no stranger to dissonance and uncomfortable contrasts. The tracks unfold slowly, some pieces are soundscapes and others unfold with more insistent tempos and structured melodies. There is a lot of darkness and minimalism in the grooves, as classical instrumentation, free improvisation, and a great deal of reconfiguration in the laboratory are stirred together. The resulting pieces are distinct and fascinating miniatures that are like small crystal sculptures - delicate and sharp, beautiful and just a little, satisfyingly bit, terrifying.

On the LP - or digital download - the sum of the parts is a rather a compelling soundtrack that can stand well on its own, but at the same time hints at the visuals. 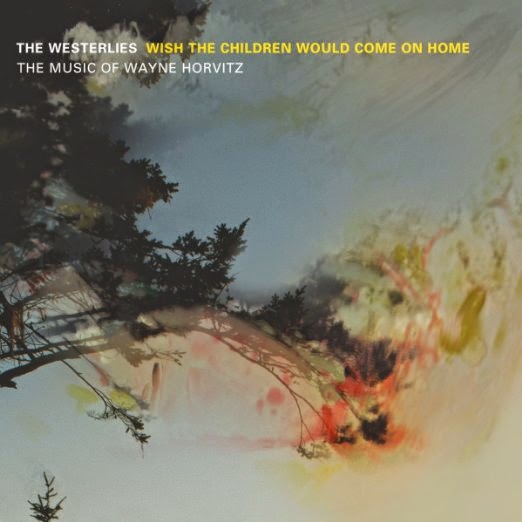 The Westerlies are a bass ensemble based in New York but originally from Seattle. They released Wish the Children Would Come On Home, an album of arrangements of Horvitz’s music, this past spring. The keyboardist contributes a Yamaha DX7 to four of the tracks, but otherwise, these are intricate, carefully arranged, impressions of Horvitz’s music played by an unusual brass quartet.

The music captures the essentials of Horvitz's compositions: the Americana tinged melodies, the sometimes abrasive but always thoughtfully juxtaposed harmonies, and their improvisational nature. With the instrumentation - two trumpets and two trombones - there is a classical feel to the music that adds some solemnity (Sweeter than they Day, Triads), along with humor (The Band with Muddy), joy (Home) and a bit of pure texture (Interlude, Wish the Children Would Come On Home). There are a lot of layers to the music, it moves slowly at times, and it’s a record that asks for repeat, attentive, listening.