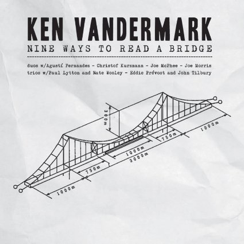 Bridges are a symbol of bringing people together, of communicating with each other, of connecting ideas. What else could reading bridges in the context of the music we usually talk about here mean but presenting different approaches of making music and trying to understand how communication works? Who else but Ken Vandermark has been constantly presenting such approaches by crossing the borders between hardcore jazz/punk (with The Flying Luttenbachers), noise core (with Zu), free funk (with Made to Break), new classical music and of course with his various free jazz/improv projects (everything from duos to larger ensembles like Audio One or the Resonance Ensemble) – and these are only a few examples! Ken Vandermark is simply one of the great masters of notated music and completely free improvisation.

This year he has turned 50 and maybe this is why he has been inspired to release so many explicit and exuberant projects like DKV Trio’s “Sound in Motion in Sound” (5 CDs), his duo with Paal Nilssen-Love and guests called “Extended Duos” (6 CDs and 1 DVD) and “Nine Ways To Read A Bridge” (6 CDs), a collection of duos with Agustí Fernández (p), Christof Kurzmann (electronics, voice), Joe Morris (g) and Joe McPhee (pocket trumpet, alto & tenor saxophone, alto clarinet) and trios with Nate Wooley (tp) and Paul Lytton (dr) on the one hand and Eddie Prévost (percussion) and John Tilbury (p) on the other – nine musicians (including himself) which display their idea of working together.

And it is no coincidence that Vandermark is part of so many projects, it is part of his philosophy as a musician. In an interview with the Montreal Gazette he said that “to get a sense of what I’m about musically you’d need to be aware of some of the variety of what I’m doing, because they’re all connected. Most of the people I work with all work in a myriad of styles. I think that process has always been there, but the difference in recent years is that now musicians tend to work in parallel with a multiplicity of ideas as opposed to having one group with whom they work for years."

With “Nine Ways To Read A Bridge” Vandermark has released an album which puts this philosophy into practice. When he plays with Agustí Fernández he adds his whole arsenal of styles to Fernández’s (prepared) piano, it’s like a flight of weird bumblebees drunk on too much nectar. The Catalonian pianist is at his best in tracks like “Probes” and especially “Points versus Spheres” when he is scratching, bowing and tearing at the strings inside the piano, and with Vandermark almost playing like Colin Stetson.

Vandermark and Christof Kurzmann have known each other from their collaboration in their extraordinary band Made to Break. While the duo with Fernández can be considered as a clash of two soloists, Kurzmann rather adds sound layers over which the reeds can soar.

On “Krakow 2” Kurzmann’s voice, which sounds a bit like a dirty, working class David Sylvian (“… nor will it save our asses from a faith to cruel to mention when from our greed and madness we have sucked the planet dry”), adds a dramatic and sombre element to Vandermark’s desperate saxophone.

While Fernández and Kurzmann are about the same age, Vandermark’s duo with Joe McPhee is a meeting with one of his heroes (they have play together quite often in Peter Brötzmann’s Chicago Tentet). The concert, which was recorded in Milwaukee, is a collection of rather short and classical (free) jazz fragments. There are a lot of introspective, even balladesque moments (“Milwaukee 1”) which are contrasted by painful and angular outbreaks (“Milwaukee 3”) – but in the end the music shows where both actually come from (the blues). And last but not least the music focuses on the great respect the two have for each other.

His duo with Joe Morris on guitar is a complete contrast to the CD with McPhee. While that one is lush and rich as to sound, the concert with Morris is as dry as a bone (and this is not negative). It’s hard to believe that the set was recorded in Chicago, it is music for grubby, miserable deserts.

The highlights of this box are the two trio CDs at the end which could hardly be more different from each other. Vandermark joins collaborations that have a history: Nate Wooley and Paul Lytton have recorded several albums since “Untitled” (Broken Research) in 2008 and Eddie Prévost and John Tilbury, founding fathers of British improvised music, have been playing together at least since AMM’s “Laminal” in 1982. In the trio with Wooley and Lytton Vandermark sometimes plays percussive or minimal riffs to structure the improvisations (“Montreal 2”) and to give Wooley’s and Lytton’s solos a strong foundation. It’s the most free jazzy album of the box set – and my personal favorite. The last CD, recorded at Henie Onstad Kunstsenter at Høvikodden in Bærum, Norway, is an exploration in sounds – no real surprise with Prévost and Tilbury. You can hear a very different Vandermark here, a musician who lets the music breathe, whose notes seem to get lost in the halls of the museum, who perfectly contributes to the musical conditions and the environment. Compared to the hectic and joyful trio with Wooley and Lytton this one is much quieter, yet equally fascinating.

With this box set Ken Vandermark proves that his music and his style cannot be pidgeonholed or codified, ”as soon as you define an art form, it’s done, it’s over”, he once said.  My friend Peter, a dedicated follower of his music, says that his music has always been full of surprises, that he is constantly ready for the unexpected which is why he is one of the great innovators on the scene.

The album is available as a 6-CD-set and can be bought from the label  or from Instantjazz.