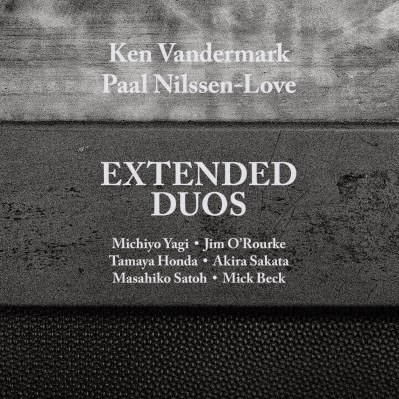 In the work of some artists there is an opus magnum, referring to the largest, and perhaps the best, greatest, or most renowned achievement of their art, often (but not necessarily) a late work in which they condense their mastership. Some examples might be Beethoven’s Symphony Nr. 9, John Coltrane’s A Love Supreme, David Foster Wallace’s Infinite Jest, Marcel Proust’s In Search of Lost Time or Rembrandt’s The Night Watch.

Extended Duos, the latest release from Ken Vandermark (reeds) and Paal Nilssen-Love (drums), who have been working together since 2001and who have put out seven albums of the most excellent improvised music in the reeds/drums duo genre (for example Milwaukee Volume or the recently reviewed Lightning over Water), is such an opus magnum.

Extended Duos contains 6 CDs and 1 DVD and it is the duo’s first release on which they include guests like Tamaya Honda (drums), Jim O'Rourke (guitar), Akira Sakata (Bb clarinet), Masahiko Satoh (piano), Michiyo Yagi (koto) and Mick Beck on reeds (he appears only on one track on the DVD). The duo is also playing on its own and their performances bookend the box set.

Even the arrangement of the music is appropriate for an opus magnum. With their duo performance in Moscow on the first two discs Vandermark and Nilssen-Love present why they have always been one of the greatest  reeds/drums duos on the scene, it is a marvelous state of the art, an exhibition of their excellent interplay, a summary of their art – in a nutshell: a reference to their own past. The last CD, another duo performance, points to the future. Compared to the Moscow concert, the duo seems changed and willing to go somewhere else. In between, with the literally extended and augmented duos, they present something different, something which shows them on new territory, where they have never been before – and especially here they show that they are willing to take that risk and explore that territory.

In detail the first part of the Moscow concert presents a highly intensive duo which could easily compete with a large band. It is a blistering performance that starts off with both musicians at incredible speed, Vandermark cannot deny his love for hard bop and funk here and Nilssen-Love is willing to support him on the one hand but on the other hand he is self-confident enough to set own standards. But there are also contemplative moments when Vandermark plays balladesque and bluesy lines in front of Nilssen-Love’s hyperactive drumming. It is pure joy to listen to all the dropping ins and dropping outs, with Vandermark playing high notes which are at the threshold of pain, and Nilssen-Love being all by himself when he is just the typical tornado of drums.

The second part (“Moscow 2” – “Moscow 4”) showcases Vandermark’s physical, muscular and even voluptuous sound even more, he ejects repetitive staccato riffs that – if he played the guitar instead of the saxophone – were pure speed metal (if you feel like it, don’t hesitate to do some headbanging). These moments are juxtaposed by parts where they remind of John Coltrane and Rashied Ali on Interstellar Space. Both variations are also characteristics of the duo’s music.

The Chicago concert on the last CD, recorded at the Hideout in June, 2014, looks ahead. Especially in the first part and at the end the music is more transparent, straighter, sometimes even airy. Vandermark takes on elements of Colin Stetson’s circular breathing approach (although in a more fragmented way), melancholic blues lines alternate with disguised techno house riffs and minimal heavy rock. Nilssen-Love brings down his style to straight, yet complicated rock beats. Reduction and disruption seemed to be the order of the day, to the disadvantage of harsh overblowing and hard bop lines (although they are not completely gone, of course). In the end they do not deny their heritage, the proved and tested elements always shine through, they build the solid foundation for the future.

This would already make a very good album – but not a great one. However, Extended Duos is full of almost unforgettable highlights (another characteristics of an opus magnum), and these highlights are the co-operations with the guest musicians.

The Tokyo performance with Masahiko Satoh, Jim O’Rourke and Akira Sakata is awe-inspiring, especially on CD 4 when Vandermark and Nilssen-Love are first supported by piano and guitar and on top by Sakata on Bb-clarinet. First the quartet seems to look for a certain direction but after the first half of the 25-minute-trip (“Tokyo Part 7”) they make you feel as if you were sitting in a high speed car on a salt lake shifting up gear after gear to break the sound barrier. And when you have achieved this Sakata joins in and you literally take off (“Tokyo Part 8”). These six minutes belong to the best music I have heard in the last few years as to intensity, grandeur, madness, collaboration and beauty.

The last part of the Tokyo performance sees the two protagonists with different partners. Vandermark teams up with Tamaya Hondo as a drummer and especially the second piece with him proves how easily Vandermark is able to adjust himself to a different partner since he plays much more discreet (like Honda), almost dream-like. Nilssen-Love’s collaborators are Akira Sakata and Michiyo Yagi (koto) and from the very first note we have high-energy free jazz again (and maybe at the moment there is hardly a better drummer on the scene for this kind of music than Nilssen-Love). Sakata is a very powerful saxophonist (Japan’s equivalent to Peter Brötzmann) and Yagi’s sound reminds of Massimo Pupillo unplugged, she is strumming full chords yet she is transparent and crystal-clear. The last part of “Tokyo Part 15”, when Nilssen-Love joins the Yagi/Sakata duo here, is another climax of this magnificent concert.

Unfortunately, I received this outstanding box set too late, so it didn’t make it to my top ten list. Both musicians are able to fall back on their already impressive work, they use it and they are able to set new standards, not only for themselves, even for the whole genre of the reeds/drums duo. If there was no new release in January and you could only listen to these six CDs and one DVD you wouldn’t miss anything. A true masterpiece!