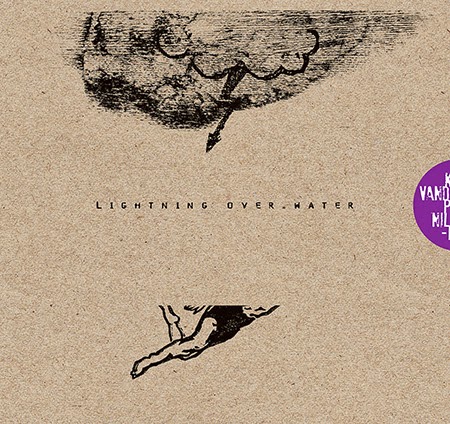 Two LPs and a 7" - if you cannot get enough of the duo of reed player Ken Vandermark and drummer Paal Nilssen-Love on this album, you're insatiable - and that's just what we want. In fact, if we weren't just a little ... umm ... obsessed with the thrill that we get from music that skirts the edges, from the tightrope of free improv to the more considered composition and all that falls between, then this sad and depraved world would be just that much more sadder and depraved. So, a hearty salute to this intrepid duo and their muscular improvisation.

Recorded at the Dragon Club in Poznań, Poland in October 2011, PNL and Vandermark continue to build upon their previously documented telepathic collaborations. On Lightning over Water, each track is engaging on its own, and taken as a whole, the set is pretty mesmerizing in its scope and depth.

Side one is comprised of the one track 'Farewell to Language' which begins with a strident groove and the throaty sound of the sax and ends with the impassioned squall of the Bb clarinet. During this journey we're treated to a range of approaches - avant funk, percussive textures, lithe melodies, and abstract yearnings.  Side two picks up right in the quieter moments where side one ends, but soon the clarinet and drums are hashing it out, with Vandermark throwing trills and PNL bashing back. The thrills continue after Vandermark puts down the clarinet and returns with the baritone sax, but most captivating is how expertly the duo creates space so that even the simplest lone woodblock can be used to fill the expanses that the two musicians inhabit. By the time they reach the final third of the side, the track titled 'Face Value', they are back with an infectiously rhythmic groove.

Throughout the recording, the two never waiver in their commitment to clear, driving, uncompromising and purposeful music that speaks directly to their dedicated - and slightly obsessed - listeners.

Get it here or here.