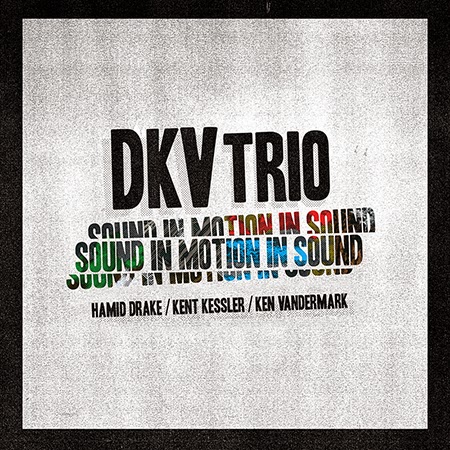 
“You never know the value of what you have till you lose it.” In the case of DKV Trio, we’ve only recently become fully aware of the truthfulness of this statement. Indeed, we’ve missed them very much during their “hibernation” (early 2000s to 2008). Luckily, they are back in full force and they have been showering us with great releases for the last couple of years. There’s even better news: Hamid Drake’s (drums and percussion), Kent Kessler’s (bass), and Ken Vandermark’s (reeds) new mammoth release “Sound in Motion in Sound” (5 CDs, 5 hours of music!) is one of the peaks of their creative output.


This album actually consists of five recordings of extraordinary concerts performed in the past two years. The first two CDs feature two shows that follow closely in the steps of those which appeared on their “Past Present” box set released in 2012. These gigs demonstrate a well-known, familiar sounding DKV Trio in great form. Still, while these performances are a magnificent example of improvised music and free jazz, a feeling lingers that the musicians back then were searching for a proper common language and trying to renew a complete mutual understanding. It’s over the next three CDs, recorded during the end of last year and the first half of this year, that we really begin to understand the might and alchemy of the trio. They are tighter, more explosive, and ingenious than ever. Imagine every DKV Trio’s signature element coming together in a remarkably dazzling, fiery display of musical prowess. There’s an almost palpable quality to the way that the musicians meld their ideas and approaches together. There’s groove propelled by Drake’s funky, loose drumming, there’s melody in the bass lines, there’s dissonance and conflict in Vandermark’s fluid, mercurial playing.


The songs are mostly improvised, but since they often use a composed basis to get going, you’ll still find bits and pieces between various shows which sound similar and obviously emanate from the same ideas. Trying to understand these variations and changes in approach that the band embarks upon from evening to evening opens an entirely new dimension to the music. The mood of the players, the venue, the audience, all of these variables and subtleties fuel the entropy that forms a DKV Trio set. I must say, it’s quite an accomplishment that the band remains so fresh and creative after 20 years of activity.


It would take me a 50-page essay to correctly dissect and analyze the five hours of music on this album. The production values are high regardless of the venue and the musicians are equally inspired on each CD. It’s obvious that these performances have been carefully selected, although I suspect that you could pick any single concert of theirs on a tour and not be disappointed. This is a great recording by an unmistakable, intense group of musicians with a sound and feeling of their own. That much is clear now. I would even dare to call this album their best to date. Inspired, full of energy, harmonically, rhythmically, and even melodically rich, capable of wonderfully recreating the joy of listening to DKV Trio live.


The end of 2014 has brought us some wonderful music and DKV Trio’s “Sound in Motion in Sound” is no exception. In fact, it ranks amongst the best this year and the sheer grandeur of this release is commanding. Recommending this album is a no-brainer. Go and listen.