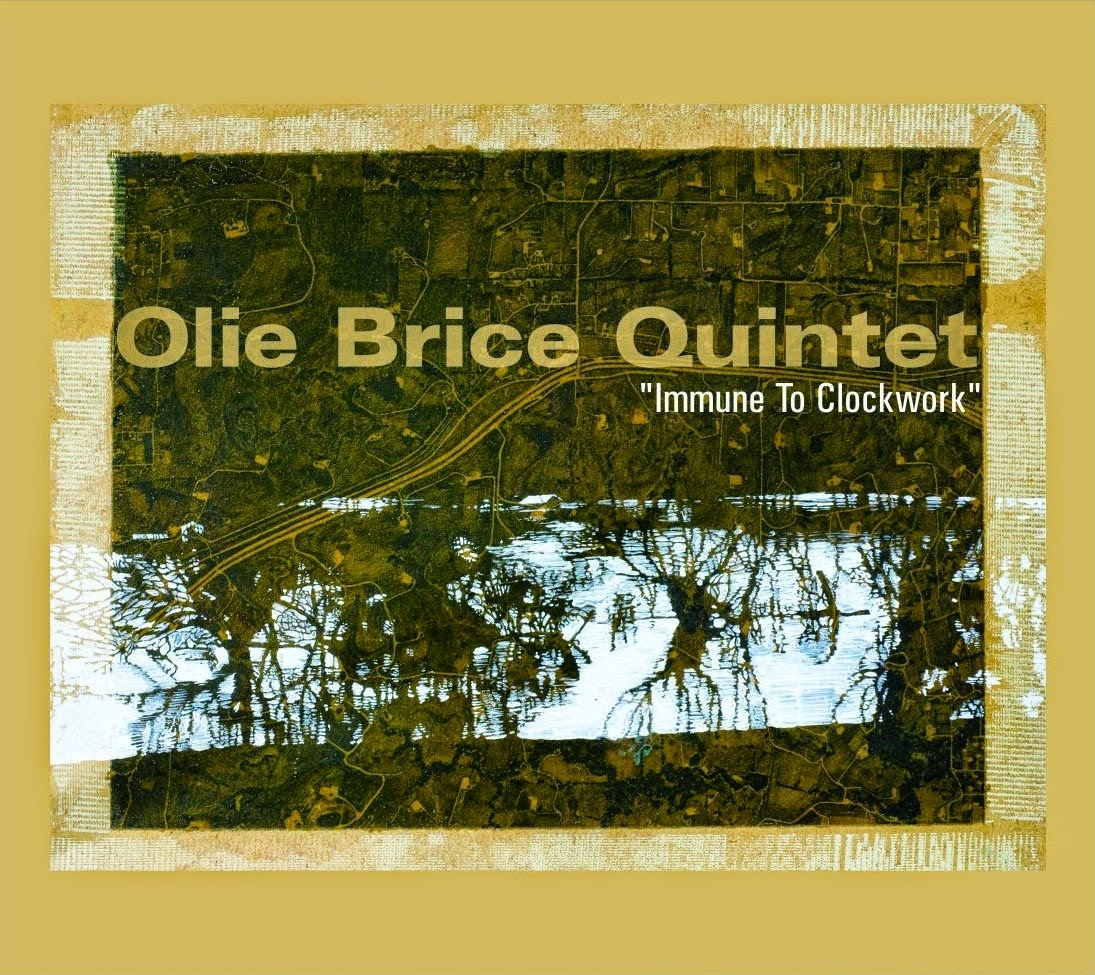 This is a recording that I've been waiting for since sometime. Hints on Olie's site about the existence of the group, and the probable recording, have been appearing for some time, therefore, to finally see (and hear) the fruits of this group is very exiting. Along with Olie Brice (bass and compositions), there's UK musicians Mark Hanslip, tenor sax; Alex Bonney, trumpet; Jeff Williams on drums, and an interesting addition is that of Polish clarinettist, Waclaw Zimpel on alto clarinet. Fusing a combination of rhythmic and rubato melody lines, the music that Olie Brice writes reminds me, at times, of Ornette Coleman's 1970s Broken Shadows period. The idea of chord-less quintet playing a mixture of free oriented musical styles, makes for interesting listening, and something which suits this approach to making an improvised music which is neither totally free, nor written, but another form of modern jazz which takes its inspiration from all genres.

Brice's compositions, although strongly routed around free improvisations, also have melodies and chord progressions, which are used as a backbone for the group to develop their own free-er ideas. This helps make the album easily accessible and yet in no way compromises the soloist's own playing. The musicians manage to sustain the high level of group work throughout the album, working around the themes to produce some fine music. Each piece has its own atmosphere, often presenting a melodic motif which the group then dissects as it chooses.

Mark Hanslip's sinewy tenor sound snakes over the compositions, moving happily between dense melodic lines or textured multi-phonics to create some great music. The underrated Waclaw Zimpel, for all that don't know him, is one of the new breed of clarinettists working on the excellent Polish improvised music scene. His playing is always exciting, rooted in melody, yet always looking for new ideas and ways of expression. Check out his playing on the Hera records (on Multikulti), in collaboration with other's, or his own quartet. The other front-line player, Alex Bonney, also deserves a quick word. His playing is definitely understated, yet always perfect for each situation he plays in (he's also a laptop wizard, engineer and producer). Here he uses melody in a way that reminds me of players such as Bobby Bradford.

As for the music on the album, there are several highlights to be found pasted throughout, here are some which spring to mind:

On the opening piece (The Hands, tk1), Mark's tenor roams around finding lines that work with the original melody which he also manages to incorporate within his solo, something we rarely hear nowadays in jazz.

Crumbling Shyly (tk4) and Tell Me Again (tk7) both hark back to 60s style rubato melodies that lurch forward before opening up to allow the horns to weave lines over the turbulent rhythm section. Tell Me Again, which closes the album, has a particularly poignant melody which the soloists seem to capture perfectly.

What Might Have Been (tk5) a fine ballad feature for tenor sax where Mark Hanslip shows how he is a master of free form and melody.

The Old Yedidia (tk2), starts with a melancholic theme before giving way to a lilting 6/8 section for the solosits. Alex Bonney's trumpet leads off, playing some lovely phrases which keep within the boundary of compositions original idea. Waclaw Zimpel follows a different path, taking a more open approach to the music. His improvisations although rich in melodic ideas, react differently to the themes. His playing, which reminds me a little of John Carter, goes more for a mixture of sonic textures, sometimes gentle and at other times his searing lines push the rhythm section to follow him.

On Immune to Clockwork (tk3) the ensemble works tightly together, improvising as a group before letting Olie Brice and Jeff Williams take over, leading us to the end of the piece with a mixture of rhythm and melody.

This leads me to the fine work of Olie Brice and Jeff Williams throughout the record. They both work with the front-line in a way that compliments and supports both the front-line and the music throughout, a perfect team in such a situation. It's a pleasure to hear these fine musicians working together, it would be great to see the group live as music such as this benefits from being heard played in front of an audience. However, the music that the quintet makes is strong, manages to remain innovative and truly accessible, what more can one ask!

If you'd like to hear a clip, head over to Olie Brice's Soundcloud to hear "The Hands" (tk1).