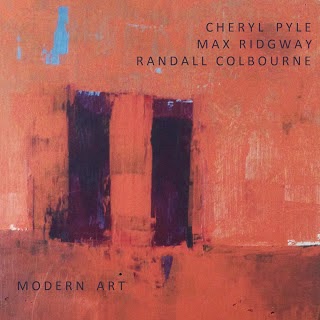 Trying to capture the essence of something visual through sound can be a difficult and unenviable task.  Yes, plenty of purely instrumental music has been written by musicians which have successfully become known for this, obvious examples being the pastoral symphonies by famous classical composers Beethoven and Vaughn Williams.  However, can the visual really be captured by sound (not really) or is it more the feeling and emotional response that is conveyed through the medium that allows us to then recreate a visual spectacle of our own making, which is closely related to the original stimuli (much more likely).

To take this a step further, if the visual stimulus isn’t something that can be readily conjured up in our imaginations and is already much more abstract to our visual senses does this then make the task of recreating this in music easier or harder?

This album by Cheryl Pyle (Flute), Max Ridgway (Guitar & Guitar Synth) and Randall Colbourne (Drums) offers thirteen pieces of music for various modern visual artists such as Willem de Kooning and Jackson Pollock. Having a keen interest in modern abstract art it was hard not to think of the visual element and to somehow compare the music with the more famous examples of the artists work.  So, does the music capture the artists’ oeuvre?  This is always going to be a completely subjective answer but no more than when normally reviewing music, which is completely down to the individual’s taste and preferences anyway.

There is a great overall feel to the playing on this album, which has a very relaxed and cool vibe to it. The music stylistically seems to float between free jazz, contemporary classical and free improv, which the trio exploit to good effect from piece to piece.  The sound of the flute in jazz is an instrumental force which should be utilised more, especially based on Cheryl Pyle’s playing.  Also she is not adverse to stepping aside and allowing the guitar and drums to take centre stage on some of the tracks.  The angular melodies are delivered by the flute and guitar in a very musical and smooth way particularly on the more free jazz orientated tracks that have a good swung feel to them.  Taken on it’s own the music on this album is wonderful and is a pleasant listening experience.  With regard to the inspiration for each of the pieces and how the music relates to this, I personally, have mixed feelings.  While I can relate to the piece Music for Willem de Kooning as a general audio spectacle for the artist and his work, not all of the pieces on the album work for me in this way.  For example, Music for Mark Rothko doesn’t conjure up the monumental nature of his work or the tragic struggle within his life, with the change of instrumentation to guitar synth seeming like a token gesture to do something different.  Also, the piece for Pollock doesn’t get anywhere near the intensity of the artist or his work that contains much rhythm and complex linearity and motion in the paintings which isn’t reflected in the music.  However, this doesn’t make this a bad album and as I have already stated there is a great feel to this music.  I also enjoyed being introduced to a few artists whose work I wasn’t familiar with such as Zao Wou-Ki.  The best thing is not to get too bogged down with comparisons between the artistic mediums and just enjoy the music.

Mark said....I wonder whether the musicians are really setting out to represent or describe the visual art with their music? I suspect it's more a case of them reacting to the art works and maybe using them as inspiration.
Whichever it is, I'd like to get hold of the CD but nowhere on Cheryl Pyle's site can I find an address to mail her as she suggests. Any clues?

Thanks for your comments Mark. Not sure about a CD, it may only be a download release. Here's the link for obtaining it as an MP3:
http://www.cherylpyle.blogspot.com/2014/07/modern-art-11th-street-music-2014.html?m=1

I think the point about points of inspiration rather than representation is correct. Art has been a frequent reference point for free jazz and improvised music. Ornette Coleman's "Free Jazz" had a Pollock painting on the cover, and Barry Guy actually incorporated some Kandinsky paintings in one of his graphic scores. A number of musicians have also been notable artists; my particular favourite is Bill Dixon, who produced some good quality work. The following article might be of interest:

I totally accept the point of inspiration rather than trying to encapsulate the art forms in sound. However, I feel that even points of departure should at least have some connection with the initial source of inspiration, which is represented somehow in the music, otherwise there's little point in using such a particular source. I also think that some of the tracks did do this particularly well, while others didn't seem to have any connection. After all that's just my personal opinion and it's an interesting point that could be debated much further. Thanks for the link to the article Colin.

Hello all ,thank you so much for listening. Max and I send out the mp3 cd via email . message me privately if you can :https://www.facebook.com/pages/cheryl-pyle-trio/141323209114 if you can email me here ... privately I can send out our new cd . peace , cheryl