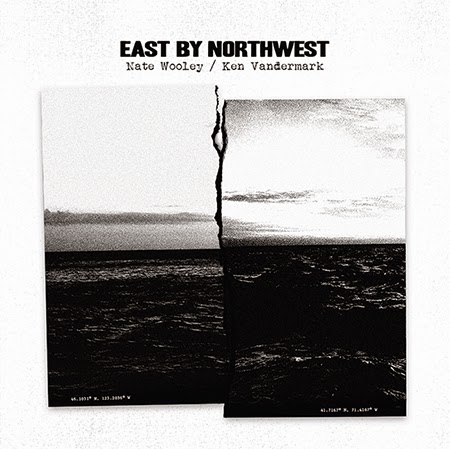 The Winter Jazz Festival hit NYC last weekend. It was a crazy scene - sold out shows, SRO venues - but there was a lot of great music. One show that really stood out was Nate Wooley and Ken Vandermark's duo set. Their concept was modeled after the combo of trumpeter Bobby Bradford and saxophonist and clarinetist John Carter, who were based out of LA during the early years of free jazz.

This show was the second date on the tour for their new record East by Northwest, the title a reference to their own associations with New York and Chicago. What struck me immediately about the show was just how full and vibrant of a sound they were able to create with just the two horns. No doubt a great deal of this had to do with their compositional approach - melodies and counter melodies stretching out the musical fabric between them, creating an atmosphere as much as actual notes and tones - but then toss in the sheer virtuosity of their playing and it is quite an ear opening experience. I picked up the CD at the show and am pleased to report that what I heard from the stage is captured wonderfully on this album.

The opening track, 'And She Speaks', penned by John Carter, begins with a delicate melody, starting in tandem and then stretching outwards. Elements of extended technique are used to shade in the spaces a little - trills on the clarinet, sputtering on the trumpet, jumps in tempo and treatments, but always rooted - however abstractly - to the melody. 'Best Coast' is another example - the two horns begin a rapid scalar ascent to a surprisingly dissonant destination, then stop, and do it again and again. 'Call The Numbers (for Christian Marclay)' features a vivid solo from Wooley while Vandermatk employs the incidental sounds of his sax to generate additional momentum. A real highlight of the album for me is 'Deconstructed Folks (for Bobby Bradford and John Carter)', the duo starts out with an upbeat theme that soon splits into parallel steams that reconnect from time to time.

I'll stop here with the track-by-track run down - why ruin the experience? This is a duo that will challenge and delight. Their playing is emotional, imaginative, and connected throughout.

Check out below video of Wooley and Vandermark playing in Philadelphia and maybe you can still catch them on tour. Plus, you can get the recording over at Instant Jazz, well, right away.

Enjoy some videos from the duo's performance at Fringe Arts in Philadelphia on Jan 11th:

See my blog on improvmusic.co.uk

Wot, no other comments?
This was a great duo, and I can't believe that no-one else is inspired to celebrate it here. After all, so many people see fit to celebrate their cats and dogs on social media. (This is probably a false equivalence, I realise!!)
Thank you for not doing a 'track-by-track' analysis, btw. This is one of the more tedious journalistic methods, as far as I'm concerned. Far better to conjure up a mood and a more general discussion of individual improvisor's contributions and methodologies (if such a thing exists). Parsing individual tracks down in real time is fine in rock and pop, but can blow away the fairy dust when discussing more open-ended music. It's also more boring to read (witness the second half of Ben Watson's Bailey biography!).
Breaking it all down to its constituent parts is fine for music school but, as Ed Banger reflected back in 1977, "I ain't been to no music school".