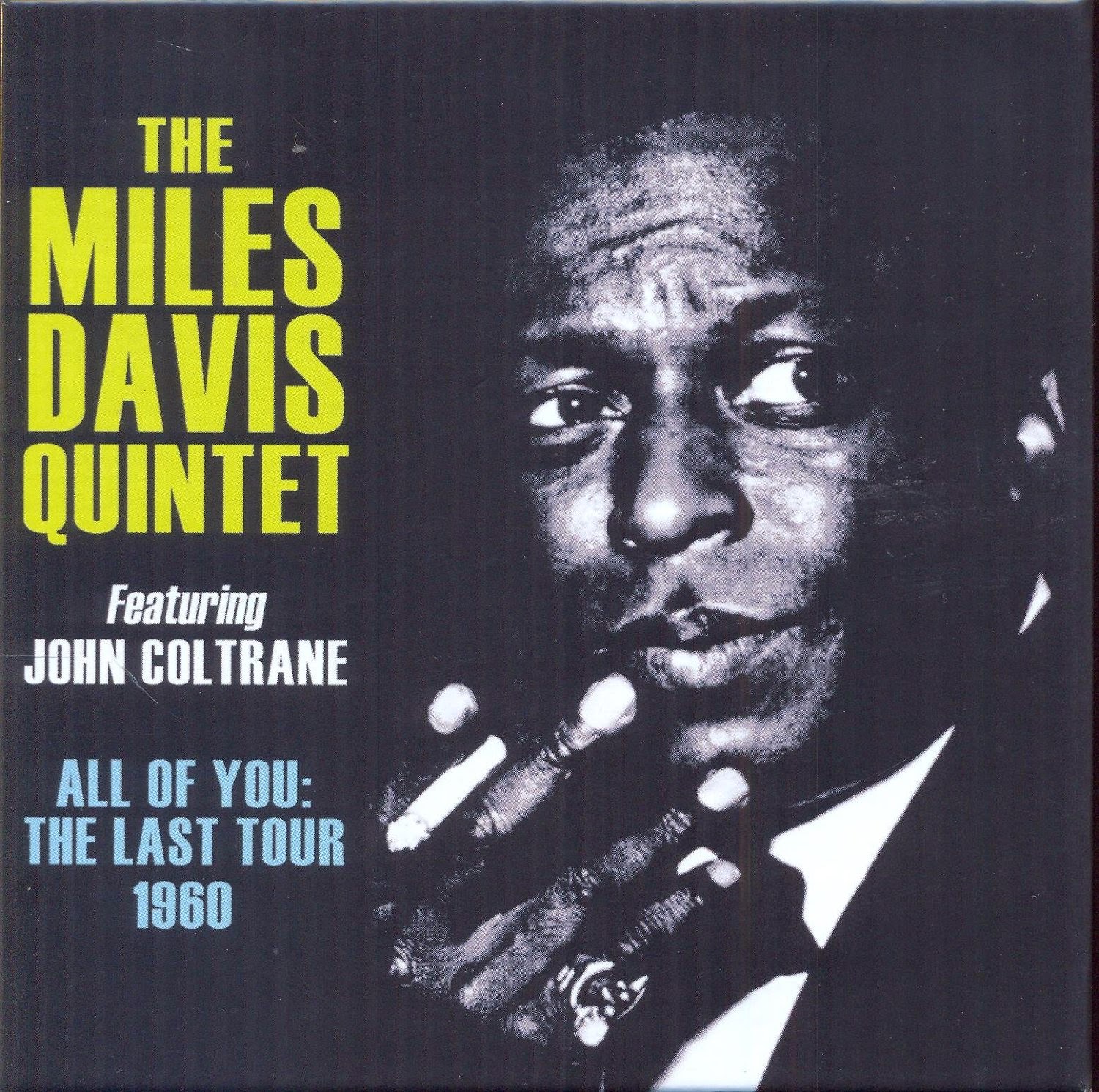 Some of my friends ask me why I rarely, very rarely, give an album 5 stars.  I always answer, “If it ain’t ‘Kind of Blue” it doesn’t get 5 stars”.  Now, that’s an exaggeration for sure because for one KOB isn’t really a free jazz album for one and secondly it’s a pretty high goal to reach for any jazz record.  Not merely because it’s the highest-selling jazz record of all-time, sales should never be a measure of artistic achievement, but because it really is a high-water mark of brilliance in any music genre.  The compositions, the arrangements, the players and the recording are a pinnacle in the annals of recorded music.  I’m sure many of us have friends who are music snobs but not jazz fans per se but I bet they own Kind of Blue (1959).

So enter the 1960 European tour of the Miles Davis Quintet featuring John Coltrane.  20 dates, some of which is represented here on this incredible collection.  The most astounding part of these four CD’s is that no-one is playing this by then well-worn material by rote.  Do we really need eight different versions of “So What”?  Hell yes!  Because they never play it exactly the same way twice.  Though the solid and dependable rhythm section of bassist Paul Chambers and drummer Jimmy Cobb is here from KOB Wynton Kelly replaces the singular, delicate voice of Bill Evans on piano and more than amply fills these shoes.  In fact, he truly shines and I gained new appreciation for Mr. Kelly from these performances.  Much is made of Mr. Coltrane’s presence, and rightly so, but to my ears it is Mr. Kelly who is keeping the whole thing together rhythmically and harmonically and when his chance to solo comes he never ceases to amaze.  Unique, bold, original and innovative at every stretch.

Back to Mr. Coltrane: his solos on this release are at times playful and harmonically complex as is his signature, stretching the boundaries of the themes and in fact the genre, and always interesting.  There are clear signs of the direction he would soon take on his own as a leader.  After sifting through all four CD’s I heard only one break where he seems to be sleepwalking through a blow but yet what was exciting was how he pulled his way out of it and ended up thrilling and titillating my ears, and the audience at the show, somehow (I won’t say which song it is lest I be delusional but you tell me

Miles Davis himself plays some of his finest breaks in this set and clearly is inspired by the material and the band (Note: absent for these shows from the KOB band for the record is Cannonball Adderley) and very probably the audiences which are rapt during the songs and very appreciate after.  It’s clear they knew they were witness to giants in their land and showed due respect and generosity.  The recordings themselves are astounding.  Beautifully clear and detailed it’s hard to argue with the one song here that you can barely hear a Mr. Kelly solo.  Someone obviously knew what they were doing and somehow preserved it which is a wondrous thing for us to have lo these 50+ years later.

Miles Davis first hired a then 29-year-old John Coltrane in 1955 and by 1960 his own star had rocketed and birthed what we now all call “free jazz” but these were his last performances with Mr. Davis.  This is a gift we should cherish.  Hell yes, 5 stars.  Are you kidding?  Go get it.

P.S.-The liner notes in the book by Simon Spillett are superb and well worth a read.  Though KOB looms large around these concerts other material such as “’Round Midnight”, “Fran Dance”, “Walkin’” and “On Green Dolphin Street” also show up here more than once.  There’s also included on CD 1 an audio recording of an interview with John Coltrane backstage in by a Swedish broadcaster that is fascinating.

Thank goodness for European public radio stations. Ditto with the forthcoming set of the Coltrane quintet's European tour from the following year. Some of the best jazz recordings from the 1960s - and beyond - come from such sources.

Whilst I am a big fan of Miles, I'm at a loss to understand why this material is reviewed on this blog. It clearly does not qualify as 'free' jazz.

I come here to read reviews that other outlets neither cover nor understand when they do. This release has been reviewed ad infinitum by other Jazz periodicals & news outlets who give cursory coverage to (capital 'J') Jazz recordings, most of whom, frankly, have had something more insightful to say than what is written here.

Please stick to what you do well, covering the left-of-centre and shining light on the often untouched below radar. Trying to mix it with the mainstream is an unnecessary digression, and here it shows the caliber of criticism, and depth of knowledge in the field, to be found somewhat wanting.

Anon, I think you need to realise that this blog is not a jazz periodical or news outlet. It's run in a highly professional manner by Stef and Paul, but the contributions are provided free of charge by enthusiasts. If someone wants to review an album that matters to them, and which admittedly falls outside the usual purview of "free jazz", I can live with that.

I'm with Colin. If a reviewer here wants to tell me about an album that matters to them, then I want to read it.

Also, even though this album is obviously not free jazz, it features one of the most important players
in its creation. Would Trane have made Interstellar Space if he hadn't first been here? I think it's really interesting to listen to this music with that question in mind.

Just to balance out the responses, I'll say that if the blog is called "Free For All" rather than "Free Jazz," then maybe Colin and Richard have a point. But it's not. Just because somebody wants to write about something doesn't mean it should be included here. Personally, Coltrane should have a place anywhere, like the proverbial elephant in the room. There's room for debate on Miles. Ed's post is enthusiastic but hardly adds to the overall level of quality of the site; maybe if it had spent less time extolling Wynton Kelly and more on tying it to free jazz movements of the time, it might have been more useful. As it is, dispensable.

AGM, I have to say that you write as if the blog were obliged to provide a daily diet of reviews that adhere to certain restrictions and meet specific standards. That's a rather unrealistic expectation of what is just a blog, not a subscription service. Surely there's enough material to meet your requirements, and the occasional off topic review in which the reviewer talks about his enthusiasms is really neither here nor there.

From time to time there are reviews of albums or music in which I have no interest. I just don't bother to read them. Given the vast range of music that's covered, I'm sure that's true for everyone.

It's cool gang, anonymous has a problem with everything I do which in fact is starting to make it clearer their true identity ironically. Sometimes people have issues with you, even when you haven't met, and can't let it go. So...whatever.

I brought attention to Wynton Kelly because IMO he really keeps the whole thing together in these shows and extolling more about 'Trane and Miles at this stage is, well, a bit obvious no?

Plus, it was not I who proposed the record to FLB but it was one of the listed recordings we're offered to cover so since I already owned it I spoke up.

As long as people keep reading the blog and caring about this music, in all its broad forms, is all that matters in the end I think so rave on!

Actually I don't know why Anon and AGM criticize this aspect now. If we had always reviewed free jazz albums exclusively and the Miles Davis albums were the first "mainstream" albums we had had here, then they might have had a point. But we have always reviewed music that does not exactly fit in the free jazz category (there is even a mainstream button in the category section to the right), particularly I have sometimes reviewed music that cannot even be considered jazz at all. I am also not sure if coverage is a criterion. Matana Roberts' Coin Coin albums, which would fit in a stricter jazz/free jazz definition, are well covered, for example. Does this mean we shouldn't have them? I have reviewed a Keith Jarrett album which will soon be uploaded and which also fits free jazz standards. Should we not have the album on the blog because Jarrett is a superstar? Of course our main focus are artists that are rather below radar. But in general it's about the music we like - even if it is obvious that it should have something to do with (free) jazz and improv. It's a fan blog, written by amateurs (in a sense that we are not professional music journalists) for fans. I think the blog also lives from contributions about Flying Lotus, Colin Vallon, Fennesz, J. Spaceman, Painkiller, Branford Marsalis or Joshua Redman as well as the usual suspects like Brötzmann, Gustafsson or William Parker.

I'd agree Martin, it would be interesting - I would say impossible - to decide where to draw the line. I would be a bit surprised to see Katy Perry reviewed*, but apart from that I can't see why one would be offended by a 'mainstream' jazz review. In fact how 'far out' does it have to be to be considered free jazz? As an example can it be melodic, and what if it has any written material in the music? The list is endless I'd guess.

In the long term I'd just say, don't worry as most of the albums we receive are not very mainstream. Otherwise, just don't read the reviews of the albums that don't have any personal interest.

Thanks for you comments all the same.

* There was a Katy Perry discussion/joke a few months back.

I appreciate the review of "All of You", as I wasn't familiar with it, but had recently bought the Olympia 1960 set. Even though I mostly buy new Avant-Garde and Free Jazz releases, I bought "All of You" based on what I read here.

Always amusing to watch the wagons circling. SO much dust, so little distance. As for rules, there is a very well-known rule, called entropy, and most organized entities fall victim to it eventually, as the dictionary defines it:

a : the degradation of the matter and energy in the universe to an ultimate state of inert uniformity
b : a process of degradation or running down or a trend to disorder

So for example, using the blog as a sounding board for Wynton Kelly strikes me as both inert and degraded, and tending to disorderly function. Of course, your experience may vary.

"Inert and degraded"? AGM, it sounds as if you're beginning to lose the plot. Try getting out more.