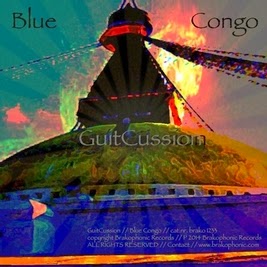 The blog has covered some of the music coming from a somewhat intertwined scene in Sweden that includes the groups Glas, HeadJive, Baptet, and some of the solo material from guitarist Gunnar Backman. GuitCussion is another permutation, in which we find Backman joined by second guitarist Stefan Thorpenberg and drummers Henrik Wartel and Per Ander Skytt, who together bring an atmospheric approach to some rock oriented free playing.

The inspiration of the double duo of the group came from Wayne Shorter's 1969 Supernova which found the saxophonist with a double duo of Sonny Sharrock and John McLaughlin on guitars and Jack Dejohnette and Chick Corea drums (yup, Corea on drums). Thorpenberg describes the music of GuitCussion as "a very intense and sweaty form of freejazz, with some Nordic harmonic influences."

Indeed, some of the tunes of GuitCussion have that certain soaring sound associated with Terje Rypdal or even Jan Garbarek, and there are moments during the album where the music feels like an avalanche of sound.  Brash and wide swaths of sound pour from the guitars and the drums push and push. However, unlike groups where the power excess of the electric guitar is the focus, GuitCussion works with a big ensemble sound in which precise melodic lines and ambient textures are given weight. The guitarists use the sonic distinction of their instruments - Thorpenberg sticks to the classics like the Les Paul and Backman utilizes a double neck guitar that controls some serious digital equipment  - to their advantage on the epic tone poems of Blue Congo.

Some of the highlights include the shifting palette on the track 'Radio Nowhere', the tactile interplay on 'Broken View', and the sheer power of the slowly erupting 'Phoksundo'.

Fans of Rypdal's Chasers and rock based improv in general, give a listen: