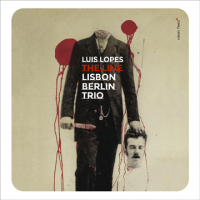 Masayuki Takayanagi used to encourage his students to have their own guitar trio, seeing it as the definitive ensemble for a guitarist to be able to learn, experiment within and lead.  This was the unit that he felt his students could be ambitious with, the trio equally providing the basic elements of melody, harmony and rhythm.  Many guitarists enjoy working within a traditional trio format of bass, drums & guitar and there are many great albums that have pushed the boundaries whilst using these instrumental forces.  Luis Lopes is no different in this respect and he has previously released two excellent albums using the trio to great effect: What is When with Adam Lane & Igal Foni as well as the first album by the Lisbon Berlin Trio, comprising of Christian Lillinger (drums), Robert Landfermann (bass) & Lopes himself on guitar.

So it was with great excitement and expectant anticipation that I approached this album, especially after the excellent debut, which was a near masterpiece within the genre and complete with the same line-up.

The opener is Dark Suite (Prologue) providing a quiet and gentle, but slightly sinister start to the album with its tentatively bowed double bass, delicate percussion and diminished guitar motives.  The feeling of this piece being revisited, altered and expanded further on its sister track Dark Suite (Epilogue) later in the album.  At the heart of this album is the thirteen minute Mother Snake, a busy, industrious and chaotic sounding piece, which is full of energy during the first half of the track.  The second half continues with the noise based material but in a continuous drone based way, discarding the more pointillistic texture of the beginning and creating an over-arching binary form where the two textures both contrast and compliment each other.  Unlike the debut where there was a fine balance between the flowing free jazz playing and the forays into free improv, The Line places its emphasis slightly more on the noise-based materials and fragmented free improvisational textures.

It certainly seems that this trio is Luis Lopes’ experimentation unit that forges ahead with the sonic explorations that his other projects might benefit from in a more refined and subtler way.  Having said that I much prefer the rough forms and purely creative play that the Lisbon Berlin Trio has to offer over that of his other work.  This is at times a demanding album and due to the selection of materials that are worked with it is not as immediate as the debut, but the eventual pay-off is nearly as great.