The following improvisations were recorded in 2012, but released at the end of 2014. 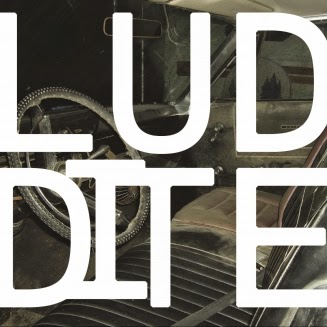 Ludd-ite, noun, def: one of a group of early 19th century English workmen destroying laborsaving machinery as a protest; broadly: one who is opposed to especially technological change.

21st century English working reed-man, Paul Dunmall, joined Yank drummer Andrew Barker and bassist Tim Dahl in NYC for a meeting.  The subject of this meeting was recorded – but what was it about the luddites that was on their minds?  Destruction of technology, or even a major opposition to it, seems a bit unlikely – after all, they're putting it down in a recording studio - but these days one can be considered a luddite for simply carrying last year's iPhone.  It is completely true that our tech age moves quicker than is practically needed.  In fact, it has become such a part of modern life that to live without regard to “keeping up” with technological advances is to almost exist outside of (a large segment of) society altogether.  In our new economy, can the term Luddite be synonymous with Outsider?  Aren't “free” players usually referred to as playing outside?   Let's consider that the modern luddite (sic) is as complex as the thing(s) he rejects – maybe more so.   He must practice what is possibly the most advanced system of all.  He must successfully navigate his way to freedom without a preordained map, electronic or otherwise, via the discipline of intuition.

On “Shame Game,” the album's opener, the trio moves hypnotically through uncharted waters with all hands on a Ouija board deck.  Once sufficient courage has been worked up, Dunmall easily weaves in and out of Barker's crazy waves of floating trash as Dahl plunks and prods from behind, keeping the big ship moving down an obstacle course through a deep fog.  This is the intuitive map they will follow throughout the voyage.

Dunmall and Barker ditch Dahl on half of the album and perform as a duo, as on the title track.  Barker empties a kitchen junk drawer onto the floor and wades loudly through the glass, plastic and wood while Dunmall plays his sax through a wah-wah pedal into an amp that feeds back often.  He also briefly mimics a theremin before diving headlong into Jimi Coltrane mode.  At times they sound like two teenagers who just heard On The Corner and decided they could do that too; and then at other time it's as if the universe is nothing but pure interstellar space.

Other highlights:  On “No Pity Party,” another duo track, Drunmall's intense-yet-extremely-melodic playing plows through Barker's multi-directional driving like a Boss.  The track peaks with what sounds like an ecstatic avian conversation around a newly-filled bird feeder.  “Champion” is a leisurely drive that accelerates only during the turns.  Barker spins an egg beater through a drawer of paperclips on “Spells” as Dunmall's rambunctious melodicism astounds with equal amounts of forcefulness and sensitivity.

At the end of the disc (“Flecks”), birds flutter and leaves rustle.  An Englishman and a New Yorker emerge from the leaf pile, shielding their eyes from the sun.  They begin to play their instruments, slowly coming to life.  The sounds they make function as a spiritual caffeine, fueling new ideas and energy almost quicker than is practically needed.  Aaaaand the world turns. 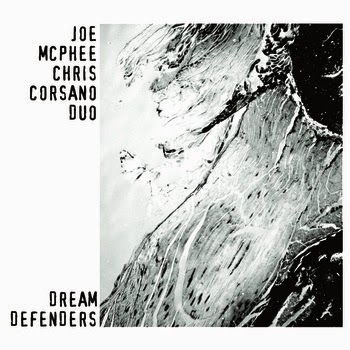 The glorious onslaught of early Joe McPhee reissues in 2014 are still getting fairly regular play around here.  It's still jarring to hear the differences between those early assaults and his patient soft harmonics-blowing today; but it's also a fairly standard line of maturity.  A man learns patience as time marches onward.  He listens better.  He knows when to speak and when to hold back.  Events are filtered through experience.  The elder man still contains the intelligence and fire of his former self; but his actions are no longer held captive by his passions.  A man who has truly grown is guided by wisdom.

Chris Corsano is experiencing a similar transition these days, I think – although it's not as obvious.  He still loves to keep on the attack.  He's still the guy who lists Adris Hoyos as a major influence (and that's a great thing).  But his role as a support player is not just being perfected, but re-perfected over & over with every collaboration.  He still dazzles; but he is also aware that dazzling isn't that important in the grand scheme of things.  He's one of the smartest percussionists working today.
So the passionate men have matured.  So what?  It makes for deeper music, that's what!  At one point on “Tell Me How Long Has Trane Been Gone (for James Baldwin),” McPhee is blowing super-soft harmonics – so quietly that the sound of clacking keys is almost louder than the notes – and Corsano enters with bowed cymbals, endlessly weaving an eerily beautiful web around McPhee.  It's gorgeous and ominous, like a blizzard at dusk.  Corsano bows alone for a short while.  When McPhee reenters, playing a perfect flurry of notes, it's as if your guide has arrived to gently move you through the storm to safety.  His presence puts you at ease.

At one point during his two-minute solo intro on “Ain't No Thing (for Duke Ellington),” Corsano pounds out a pattern that sounds like the Drummers of Burundi – all of them!  When McPhee enters, his tone is simultaneously warm, inviting, shrieking, splattering and lovely.  It's as if they're both reminding us of their full capabilities, how large their arsenal really is, and how badly they don't want to simply throw it all at us.  “Here's just a short peek at what we could do to you if we wanted to...”  A sophisticated show of force is far more effective than a being exposed to a wild bunch of yahoos shooting their weapons off in every direction until they run out of ammunition.

McPhee plays around with various two-note riffs on “The Icarus Effect” while both musicians allude to some pseudo-rumba tempo for about two-thirds of the track.  It is a flawed flight, but a fascinating one.  The highlight for me is “Other Evidence,” featuring Monk's famous melody leaping and loping out of the saxophone bell, and being chased by Corsano up a ladder into the clouds within one minute.  It suits its precise and concise author well; the whole track times out at 2:16.  It is perfectly stated.  Perfectly contained.  Perfect.

Note:  I'm giving this one 4 stars instead of 4.5 because Corsano is often buried in the mix.  It sounds like McPhee was playing through a PA and Corsano didn't have a single mic on his kit.  And the recorder's lone stereo mic was placed somewhere at the back of the room.  But overall, the music here is so rich it's a minor complaint.  And at the price of the download it's a total bargain!