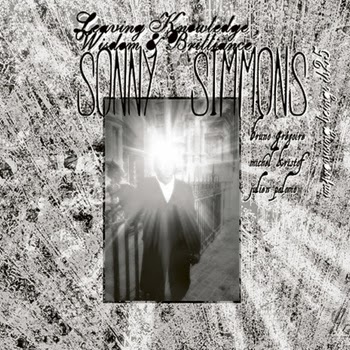 Sonny Simmons' massive eight disc box set, "Leaving Knowledge, Wisdom and Brilliance," is a genre defying, deeply personal and spiritual effort that dips into so many realms that one single review can't do it justice. It is almost eight hours of music! I can only break it up into two parts, and here, the focus is on “Leaving Knowledge," with Simmons on sax and Julien Palomo on electronics.

The ten tracks that comprise this session are excursions into sonic realms that are alternately eerie, uplifting, and trance like. Like a Vangelis or even a Jean Michel Jarre, Palomo sets the stage with tones that move back and forth like a gentle wave, and Simmons plays on top of it. The tracks are very lengthy, all over 10 minutes, many over 20. Starting with “The Inner Outer Chord,” the overall mood is low key, hypnotic, unexpectedly blues like. Like a mellow electronica version of Junior Kimbrough, where the dirge like despair becomes here meditative, peaceful, uplifting. Blues ragas mixed with synthesizers. Simmons will from time to time pierce the mood with his vocals, uttering blues phrasings. “What Do We Know? - Who Are We” has a middle eastern flavor, with Simmons’ evoking a middle eastern horn as he solos, notes echoing as if from a distance, with Palomo adding extra exotic flavors for a little drama. Then Simmons breaks into a more familiar jazz solo, before giving way to electronics, ending the track with a soft ballad like mood. “You Are Not Higher Than Angel” comprises of two tracks with the same title, a total of 28 minutes. Simmons again evokes the middle east horn sound, more somber this time, with percussion tapping with the horn. It evolves to a full blown raga, with sitar in tow, all instruments reverberating, increasing in tone before falling to silence. The second track goes straight back into the raga, more forward and strident this time. The tension is palpable and the playing is terrific — for me, these two tracks are the high point of this set. “Five is the Thumb” is space music, all ethereal and dreamy , establishing a tone, before the electronics get a little harsher and noisier, building tension, falling back into an electronic music tone, Jean Michel Jarre like, with Simmons chanting along with the pulsations. "Four is Equal to the Fingers” is another raga like track, thirty minutes of slow moving tones before climaxing with a few minutes of high energy playing. “The Fatherlands” is a bit more up front, a persistent and demanding percussion and far eastern like plucking that burrows itself into one’s consciousness like a woodpecker. It changes halfway to a soothing tone, percussion relegated way off into the background, Simmons playing almost ballad like. “Three is A Powerful Figure” is the most Vangelis like track on this session, Blade Runner like, the electronics creating a menacing mood and Simmons chanting and playing in kind. It’s like being taken to a realm that is unfamiliar and not quite welcome, but you are compelled to experience it and be affected by it. “You Are Not Higher Than Angel” is the final track, featuring a bit of everything that has gone on before, droning electronics, chants, middle eastern horn phrasings.

For the three hours, “Leaving Knowledge” takes the listener through a journey of sounds, flavors, and moods. It is a spiritual journey, one far removed from the works done in the late 60’s and 70’s that made Simmons known in the improvised music scene. Overall, the tracks by themselves are neither here nor there -- not exactly passive background music, Simmons and Palomo are too inventive to let just things lie. These are textural works that incorporate elements from many genres and cultures. Worlds apart from what Simmons has been known for in the past, his ESP work, to his revival in the 90's, “Leaving Knowledge" is a look into an artist who has shed himself of the burdens of his own history and gone off deep into the unknown. It is one heck of a leap, and makes for compelling listening.