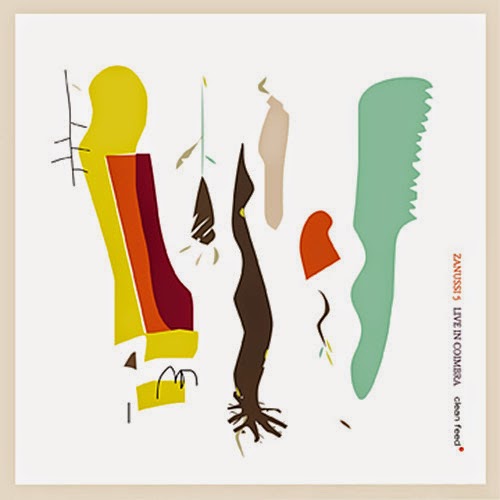 The Scandinavian (especially Norwegian) jazz scene has been home to a slew of wonderful bands and projects during the past years. This time around, it’s bassist Per Zanussi and his quintet that impress us with some amazing and involving music.

Live in Coimbra is, as the name says, a live recording of Zanussi and his cohorts’ performance in Portugal during the Jazz ao Centro 2013 festival and the group’s fourth release. A record so good that by the time you’re done listening to it, you’ll wish that you could’ve been there. Because while the sound of Zanussi Five is difficult to pin-point and describe succinctly and precisely, it’s always positively endearing and imbued with a tinge of Latin (or is it Mediterranean?) intensity and temperament that’s just enough to make it highly addictive and almost danceable. There’s a bit of everything here, from ambient touches to funkiness and exotic modes, and not one of these elements feels out of place or forced. Not at all. It’s beautiful, yet complex music.

Whilst the intro to the record, “Celestial”, is muted, minimalist, even resembling electroacoustic music, the following four tunes are quite dynamic. Groove and wild improvisations intersect while the seductive, pulsing bass lines and Gard Nilssen’s drumming act as anchors. “Hidden People” might remind you of Lars Hollmer’s antics and “All Wrath”, the longest track and a “magnum opus” of sorts, showcases all of the musicians’ chops. Zanussi never imposes himself, playing with fluidity and acting as a true leader. The group is elegant and nimble in their execution, whether swinging or pushing subdued phrases during ballads, painting an accomplished and compelling picture with Zanussi’s material.

There’s rhythm, there’s melody, but the quintet never overindulges and lengthy, interesting, and inspired improvisations break and reassemble the colourful mosaic. Meanwhile, the three dominant reedists, Kjetil Moster, Jorgen Mathisen, Eirik Hegdal on both saxophones and clarinets, propel the ensemble, making waves and splashes. The powerful harmonies carried by saxophones might even fool you into thinking that you’re listening to a big band jazz ensemble, possibly evoking Martin Küchen’s Angles 9. I digress, but this record once again shows that Küchen and Zanussi are kindred souls sharing similar sensibilities, something quite obvious when you listen to their beloved Trespass Trio. Yet, Zanussi’s vision of jazz is unique and, as I’ve said before, this collective is not afraid of combining and toying with idioms from various corners of the jazz (and not only jazz!) scene.

The unfortunate thing concerning releases coming near the end of the year is that they often get overlooked. If I had heard this album earlier, it would have been a strong contender for my best of 2014 list. Lovely music, great musicianship, and inspired compositions and performances make this a no brainer to recommend. And Per Zanussi, well, he proves once again that he is not just a great bassist, but a great leader as well. Hats off to the guys!