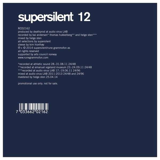 By  Paolo Casertano and Martin Schray

Martin: It’s been a long time - almost four years - since Supersilent published their last album. Before that, Supersilent had shrunk from a quartet to a trio after drummer Jarle Vespestad left the collective. Since then it has just been Arve Henriksen (tp, electronics), Ståle Storløkken (keyboards) and Helge Sten (electronics). That change had a dramatic impact on the group, one that left them looking for a coherent artistic concept. The result was the strange and extraordinarily gloomy Supersilent 9, on which they all played Hammond organs, the very accessible Supersilent 10, where they do almost completely without electronics and actually play unplugged, or Supersilent 11, which consists of old material with Vespestad. Now, for the first time after his split, the band sounds as if they had found a way to deal with their reality as a trio.

Interestingly enough, I have listened a lot to Sun Ra’s music last year and now that I have been delving into the work of Supersilent again, I recognized a lot of Ra’s influence on their music, especially the synthesizer sounds seem to come directly from one of his albums, something I haven’t realized since you introduced me to their music about two years ago, Paolo. How would you - as a true “supersilencer” - categorize this album?

Paolo: Martin, first of all, let me say that everything seems to reconnect. Recently I’ve been listening painstakingly to Sun Ra as well (mainly thanks to the excellent selection compiled by Marshall Allen that drove me through the boundless Sun Ra discography in which it’s easy otherwise to feel lost). And we also can’t ignore that Helge Sten, a long time collaborator - kind of extra member - of the Norwegian group Motorpsycho, had a prominent role especially in one of their most famous albums (and furthermore, one of my favorites): “Angels and Demons at Play”. Again Sun Ra. I’m not speaking of the music genre, but of something more subtle and hidden. Something “alien” would be easy to say.

But coming back to this album, the first thing I notice is the “choice” to go for a more traditional conception of song, shorter and fully developed compositions instead of the long growing suites that have always typified their approach (or can it be the result of the new structure of the group, considering that Supersilent, as we know, don’t use to rehearse anything before the recording of their work and neither speak about their musical plans, giving the widest possible meaning to the concept of improvisation?). As you say Martin, for the first time they seem truly reconciled with the absence of the drum. In some way I’ve always seen Vespestad as the only soloist of the group, especially in their live sets, with the other members - even the dominant Henriksen - focused on building a frame where the drummer could explode. At first Vespestad’s leaving the group took Henriksen to fill this void and to take over the “melodic” role, often favoring the drum kit to his trumpet (and the results were nothing less than amazing anyway).

The opening track also reminds me of a dry version of the Vangelis score to the first scenes of Blade Runner, undressed of all the orchestral tinsels and even gloomier than the original. When the flying car finally approaches the roof of a megalithic building, synths start howling and climbing on each other. It is Storløkken here to interrupt the background vortex of tension with short cutting passages. Henriksen also seems to be seeking new routes for his trumpet in the group context here, in some moments his presence is far and the metallic effect is very distant from his recent solo production, warm and blowing, or from what we find also shortly later in this same album. All in all it’s always enchanting how they instinctively seem to merge an industrial structure with a folk, almost pastoral soundscape. Listening to a Supersilent work always brings you to the dawn of some musical conceptions and routes, but at the same time what they sound never seems surpassed or lacking of modernity. What do you think, Martin?

Martin: Like you I adore Motorpsycho a lot (especially “Angels and Demos at Play” - maybe their magnum opus) and I also thought of the Blade Runner soundtrack (one of my favorite films, by the way). As you said: compared to some of their other albums it is obvious that Supersilent 12 is a compilation of rather short fragments. Yet every track here has at least one feature to recommend, so that all of them are somehow unique and none of the tracks could be omitted - whether it’s “12.2” with its cacophony of car honk sounds or “12.5”, in which Henriksen’s trumpet seems lost in reverie when he is confronted with electronics in space (which sounds like a meeting of Sun Ra and Miles Davis). Also, the ditty-like intermission in “12.8” or the simple beauty of Henriksen’s trumpet in front of ultra-low bass notes and brutal noise (“12.13”) make perfect sense. Listening to Supersilent 12 in the context of their last albums it seems a lot more experimental again, especially compared to Supersilent 11 with its organic drumming and its approach somewhere between Kraftwerk, ambient sounds and acid jazz grooves. In the end, I like their music better without a real drummer because now they can focus on exploring textures.

Paolo: We may say that after 15 years as a group and ten official releases, Supersilent have not lost their attitude to explore new paths and reconfigurations. The three actual members have progressively evolved from a group to an “enlarged cohesive musician” and this gave them even more chances to build a stage for any incoming collaborator (in my opinion what already happened somehow with Vespestad). Just think to their recent tours with John Paul Jones or the gigs with Stian Westerhus.