The Masters of the (Double) Bass II 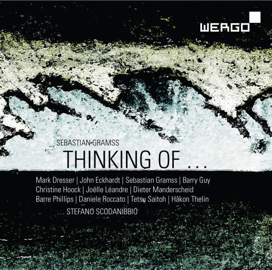 Thinking of … is a homage of Sebastian Gramss dedicated to the late, great and visionary Italian bassist Stefano Scodanibbio. Gramss’ project gathers the crème de la crème of international bass players, all in all eleven musicians, among them Barry Guy, Joëlle Léandre, Barre Philips, Mark Dresser or Tetsu Saitoh. The CD itself consists of a 10-piece-suite based on Scodanobbio’s musical approach and eleven solo pieces by the musicians who remember the Italian master. The suite was recorded by each of the musicians at their own studios only with the help of Gramss' loose instructions. The result are ten short sketches, which Gramss put together after the recording process was finished. Gramss pays his respect to Scodanibbio’s music by following it on the one hand and by exploring its structure and by trying to push its limits.

In the solo part of this recording the bassists pay tribute to Scodanibbio in an individual way by trying to integrate Scodanibbio’s approach in their own playing. You can hear Barry Guy using his typical extended techniques juxtaposed with the young German Christine Hoock’s very eccentric version of Jimi Hendrix’s “Foxy” Lady”, or Joëlle Léandre’s very intimate and personal “For Stefano” opposed to Håkon Thelin’s light-headed folk miniature “h-moll/D-Dur”.

The last track is a previously unreleased duo of Scodanibbio with Gramss, that illustrates Scodanibbio’s immense influence on today’s new bass music. No wonder John Cage called him the most extraordinary bassist he has ever heard. 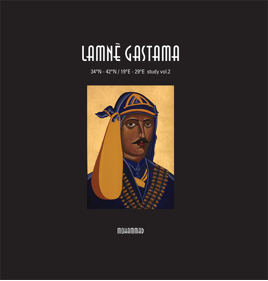 Lamnè Gastama is the second volume of a trilogy by Mohammad that explores the sounds of the geographical area between 34°Ν – 42°Ν & 19°Ε – 29°Ε (the area around Greece) and with whom they succeed in perpetuating their masterpieces Som Sakrifis and Spiríti (after the ambivalent first part of the trilogy Zo Rèl Do). With this album we transgress the bass-only albums, since the band is not only Coti K. on bass, but also Ilios (oscillators) and Nikos Veliotis (cello). Yet, as to timbre this music is deeper and darker than all the others.

When I first heard “Pichak”, the first piece here, I was immediately reminded of a scene in a documentary about the North Sea that deals with the Greenland shark, a strange creature that can get up to 200 years old. It is very slow and said to be a corpse eater. Some people call it “the gravedigger of the North Sea”.

Lamne Gastama is the nemesis of everything that’s funny, easy, good-humored – it makes Black Sabbath look like bubble gum music. But then again it is more than just another plain doom record which is based on extremely dark experimental metal, although darkness, somberness, drones, grinding and bottomless low frequencies are an integral part of Mohammad’s sound. However, they are not an end in themselves but rather an exploration of density and texture. The music comes on with a dark, majestic roar, like a sky diver tumbling backwards out of a plane – but he falls down into the darkest pits of hell.

It is obvious that this music can put you in a gloomy mood, due to its consequent repetitions and intense drones. But it’s also very captivating. You definitely have to play this loud!
Lamne Gastama is available in a limited vinyl edition of 450 copies and as a limited CD edition of 500 copies.