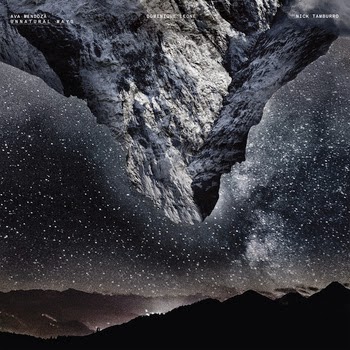 Guitarist Ava Mendoza has been toying with the phrase 'Unnatural Ways' for a while now. Her 2012 duo release with percussionist Nick Tamburro was titled Quit Your Unnatural Ways, and her current working trio with bassist Tim Dahl and drummer Max Jaffe is called Unnatural Ways. On this album, Unnatural Ways, Mendoza is accompanied by her previous Unnatural Ways line-up of keyboardist Dominique Leone and Tamburro.

Pushing at the edges of free jazz and avant-rock, the album's fiery opener 'Shapeshift' is a solid block of rock based improvisation and composition that blurs musical categories. It features some fierce fretwork, loop augmented rhythms and a shifting undercurrent of tempo. Though heavy at times, the music is still textured and nuanced.

Then it gets crazy. 'Dogsbody' features Mendoza's punkish vocals - with lyrics at least ostensibly about dogs - tangled up with her knotty guitar lines. The following 'No Record' is a nice bit of avant-prog, starting with a Crimsonesque intro that segues into a vintage Janes Addiction-like melody in which Mendoza observes that "everything we do is being recorded".  'Goodnight Irene' is probably my favorite deconstruction of a folk song since Ribot undid 'St. James Infirmary' on his solo guitar album Saints. In Mendoza's hands, the Leadbelly song snarls, lurches, and sticks menacingly to the ears. 'Danifest Mestiny' begins atmospherically, but the surrounding space is boiling, and the track quickly becomes a stomper with lyrics sufficiently obscure to invite a deep listening. The throb of the keyboard gives the song an even more foreboding presence.

Unnatural Ways is a significant statement from Mendoza. It showcases her past musical associations and points to where her music is headed. For me, the vocal parts were a bit of an acquired taste (isn't that the best kind?) but after repeated listening their importance in the music became clearer - in fact the whole thing comes together in kind of a natural way.

Give it a spin, see what you think:

Mendoza's Unnatural Ways is playing at the Downtown Music Gallery in New York City on Tuesday May 5th at 6:30 p.m.
Paul on Wednesday, April 29, 2015
Share

Ava's worked with Nels Cline and Moe! Stiano in the past, she's fantastic live!

Heard her with Henry Kaiser free improvising to Brandy Gale's real time improvised painting. No other instruments and no predetermined musical structure. The most memorable guitar sounds I've experienced.