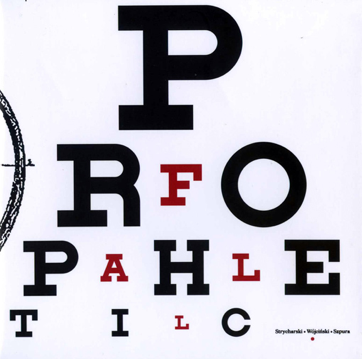 The recorder is an instrument I am almost allergic to. The reason has to do with my job. At my former school all the students in the fifth grade had to learn it and sometimes they did that on the stairs in the hallways or out in the open (in summer). So you couldn’t escape “Morning has broken” in recorder versions. But recently I saw a show on German TV with German classical flutist Dorothee Oberlinger playing a Scottish dance – and it was fascinating.

So, when I saw that this album was starring Dominik Strycharski on all kinds of recorders and sopilka (a woodwind instrument of the flute family used by Ukrainian folk instrumentalists), I was at least interested what he does with them, especially since he was augmented by Ksawery Wójciński on bass and fabulous drummer Paweł Szpura.

All in all, the trio is mainly interested in combining Klezmer melodies and Ukrainian folklore with free jazz, which works surprisingly fine, for example in “Exactly Confused”, the opening track of the album. But the highlight of the album is the meditative ballad “I was asking” with its dark soundscape. Interesting approach.