And so we wrap up Polish Jazz Week much like we began, with a round up of recent releases and an invitation to listen to the music we wrote about this week with Martin's "Freejazzblog on Air" on SWR2 this evening. If you are unable to tune in at 11 p.m. wherever SWR2 reaches in and near Germany, you can listen online for the next week.

After reading so many reviews this week you might wonder why the Polish improv scene is so special (compared to other Eastern European countries like Bulgaria, Romania, Ukraine or even Russia). During my research for the radio show I contacted Maciej Nowotny from polishjazz.com (among others) and he told me that it has been one of the most crucial aspects of the Polish scene that Polish jazz has always been connected to film, fine arts, literature and philosophy (for example existentialism in the 1950s). This has been handed down from generation to generation which has resulted in the fact that the Polish intelligentsia has been very interested in jazz up to today. He even said that it would be almost impossible to be called intellectual if you are not deeply into that kind of music. So, after the fall of the iron curtain, a new scene emerged which is very interested in new things and which is very well connected with musicians from all over the world. It is mainly due to this new generation that free jazz is relatively successful in Poland, because they try to express what’s important for them and what’s going on around them.

What is also helpful is the fact that there are great labels supporting this scene. They run their businesses out of passion, commercial interests are only secondary to them. Names like NotTwo, ForTune, Kilogram, Multikulti and Bocian are only the tip of the iceberg. And since the musicians do not get rich by selling their CDS and LPs it is vital that there are great venues like Alchemia in Krakow, for example.

Considering all this I guess we will hear a lot from Polish musicians in the future. And we are looking forward to it. 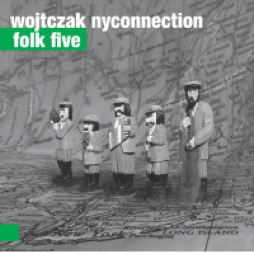 Polish jazz is not only restricted to Poland, it actually is an open and attractive field for musicians from all over the world. As mentioned in the introduction to this week, labels like ForTune, NotTwo, Multikulti, Kilogram or Bocian have an excellent reputation and venues like Alchemia in Kraków belong to the best clubs for free jazz in the whole world. A musician like Ken Vandermark, for example, has established a project like Resonance Ensemble, a mix of Polish and Chicago musicians (sometimes augmented by Scandinavian musicians), that has recorded remarkable albums (like Head Above Water). Wojtczak’s NY Connection is a similar collaboration.

Irek Wojtczak is a Polish saxophonist and for Wojtczak NY Connection he is joined by the New York City-based Fonda/Stevens Group consisting of bassist Joe Fonda and pianist Michael Stevens plus trumpeter Herb Robertson and drummer Harvey Sorgen. The result is an exciting and very elegant brew of splendid modern jazz mixed with Polish folk music like on “Cztery Mile Za Warszawa”, for example. It is a piece in which Polish influences clash with a New Orleans funeral march atmosphere as well as with Robertson’s cool jazz trumpet – you might call it Polish blues. In general compositions like “Weselny” should be played late at night (or in the very early morning), they are of exquisite beauty, Kenny Wheeler’s last albums seem to have been an obvious inspiration.

There are also distant polka intersperses in two pieces, “Pod Gazem” and “Kiej Jo Ide W Pole”, the first one a piano solo for Stevens that reminds of  Keith Jarrett’s “My Melody at Night, with you”, the latter a mixture of pre-free-jazz Coleman and Charles Mingus starring Wojtczak on bass clarinet playing an outstanding solo.

Like the above mentioned Vandermark group this connection seems to work marvelously as well, there is some kind of affinity of spirit in Polish and American jazz. And above all the album comes with a great cover as well. 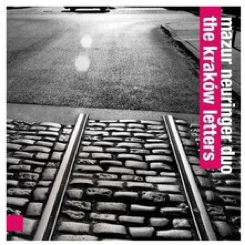 Another transatlantic cooperation is this duo recording of American saxophonist Keir Neuringer and Polish avant-garde jazz acoustic bass guitarist Rafal Mazur, a duo that has already released three albums (Improwizje was reviewed by Stef in 2010). I first came across Neuringer when I read Stefan’s review on his solo album Ceremonies Out of the Air and was immediately deeply impressed by Neuringer’s extraordinary command of the instrument.

Communicating with another musician makes Neuringer’s approach even more gripping. The two sound as if Luc Ex and Colin Stetson had joined each other, Mazur playing his bass more like a guitar and Neuringer delving in circular breathing. But there is more to their music, there is an immense intensity, an almost brutal expression and a dedication which is absolutely uncompromised, which can be seen at challenging staccato lines and wild runs (“Letter #3”). Although the sound of the acoustic bass guitar needs getting used to the emotional quality of this music is almost breath-taking.

Listen to it here: Guitarist Łukasz Borowicki’s trio consists of Polish bassist Mariusz Praśniewski and Danish drummer Kasper Tom Christiansen. Borowicki’s sound meanders between early John McLaughlin and Raoul Björkenheim’s excursions with Scorch Trio, his style can be edgy, boisterous and distorted, then again he is also melodic and accessible - often in the same track as in the opening piece “Happy Summer”. The compositions include notated parts and completely free form and present the band as a tight unit. Most pieces are full of structural and textural changes (as in “Hiss and Rumble” with its allusions to minimal music), the musicianship is extraordinary, bass and drums are supportive and unobtrusive. People, Cats and Obstacles is a fine debut album of a band we should keep an eye on. Maybe this is an album for you, Paul. 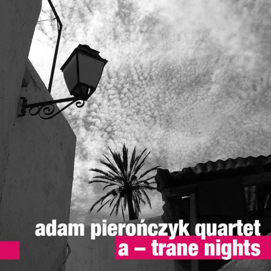 And last but not least an archive recording by Polish heavyweight jazz legend Adam Pierończyk (saxes)  who is accompanied by Australian trombonist/didgeridoo player Adrian Mears, American bassist Anthony Cox and Polish drummer Krzysztof Dziedzic, so we have another international collaboration here. The album is a live recording  from 2008, based on a  studio recording of the same material, which was already released as “El Buscador” in 2010.

A-Trane Nights is classic modern jazz, there are hardly any free elements on this album. However, it’s not mainstream either. Pierończyk has developed a voice of his own between notated melodies and riffs and excellent soloing  work, he leaves a lot of space for his fellow musicians and while Cox mainly tries to support trombone and sax, Dziedzic sometimes interprets his role like an additional soloist. Especially the two tracks with the didgeridoo create a very laid back atmosphere.

I really enjoyed this series. The ForTune label is truly a powerful force in modern jazz. As the USA has sadly failed its own legacy it it reassuring to see the ball picked up by the likes of ForTune, Clean Feed & NoBusiness.

Great focus on polish jazz. Listened to the radio show this morning. Awesome!! Is there a playlist for the show somewhere (for non-german speakers)? I'd love to know what I'd listened to.

a small correction to the introduction.

the best free jazz club in Poland is Pardon To Tu in Warsaw (check their program - every month is like Christmas for free jazz fans:) ), Dragon in Poznan is also worth mentioning. Alchemia, while still on the map, is unfortunately not that active anymore (except for the Autumn Festival)

the Resonance ensemble has a very steady lineup so it's a mistake to say it was sometimes agumented by the presence of Per-Ake and Magnus Broo from Sweden who are pretty much always there. Apart from Sweden, Poland and Ukraine there's also New York element represented by Steve Swell (who had never played with Ken before the project!). The line up changed slightly only few times:
Between the first and second meeding Youriy Yaremchuk left the band and Waclaw Zimpel joined it.
When the band visited States, Mark Tokar (from Ukraine) was declined the visa and he was substituted by Devin Hoff (reflected both by the title of their next release "What Country Is This?!" and by the last one which has two concerts on it, with Mark present on the recording made in Europe and Devin the one done in the States).

For their last visit to Krakow the plan was to fit together Mark and Devin but unfortunately as the latter had to cancel the visit the band was joined on stage by Christoff Kurzmann.

Apart from that - I'm very glad the polish scene gets some (well deserved) attention :)