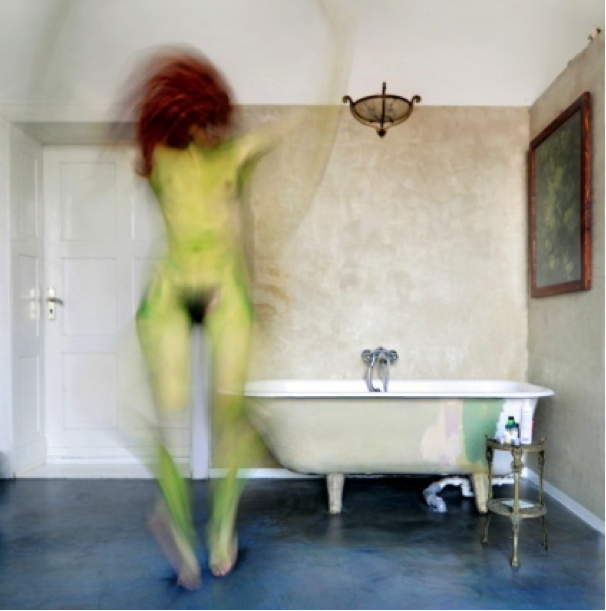 The first thing you have to know is that this album is really good. Not in the sense as many albums reviewed here (which are also good and recommendable) - this album is outstanding, excellent, amazing, wonderful. It is simply splendid.

Kammerflimmer Kollektief’s mastermind Thomas Weber started this project almost 20 years ago. His roots are in the alternative rock scene but after the split of his first band he began to make music with samples and loops. After several changes in the line-up of Kammerflimmer Kollektief, today’s group came up – with Weber on guitar and electronics, Heike Aumüller on harmonium and electronics and Johannes Frisch on double bass.

One of the fascinating things about Kammerflimmer Kollektief is that their music is hard to pigeonhole. It contains elements of surf music, free jazz, ambient sounds, alternative rock, dub reggae, pop (to name just a few influences) - my friend Ernst calls it “free ambient”. In general their approach is a clash of pre-fabricated loops, samples and notated structures with improvised parts. Weber brings in these ideas and then the band improvises over them, the jams are recorded and then he puts them together, he edits the results before the musicians start working with this new material again. So the songs are like collages, after they are ready the band lets them rest and then listens to them again to check if they still work after a certain time – very often just to change things again. This leads to different transitions and sounds, even to new instrumentations. Sometimes the results are quite different after such a check-up.

Kammerflimmer Kollektief have released marvelous albums before (s. below) but Désarroi is their masterpiece so far. The reason for it is simple: it’s their freest piece of work, an album which is wonderfully balanced between a basic psychedelic atmosphere and angular, atonal improvisation, something Johannes Frisch is mainly responsible for because his bass is free from creating a pulse (the loops are responsible for that). Désarroi (French for confusion, disorientation, despair) indeed is confusing and disturbing, under a smooth surface (Weber’s guitar reminds of Angelo Badalamenti’s work for David Lynch) Frisch’s bass is rumbling, creaking and scratching and Heike Aumüller’s harmonium augments the sombre and gloomy atmosphere.

All in all Désarroi is a melting pot of biker rock guitars, Nico’s late albums, Pink Floyd psychedelia (in their Ummagumma days) – as if William Parker was jamming with Lee Scratch Perry and Velvet Underground. It’s a clash of a world we know with the unknown. This idea is most obvious in “Evol Jam: Edit”. The liner notes describe the track wonderfully: “Aumüller sings “the more you love, the more you can love” until her syntax deteriorates and her language dissolves, blurring into musical passages and sounds, and finally returning to her initial structure of singing.” This love Aumüller sings about is the music itself – it comes from a certain order, then it transgresses these boundaries, gets lost, tries to find new ways, maps them, and comes back to the beginning.

And in this world of love/music there is always space for pure beauty: The icing on the cake is the cover version of the old S.Y.P.H. song “Zurück zum Beton” (“Back to Concrete”), an early German punk rock classic. While the original is raw and edgy, a song where the anger about the cheesy romantic notions of nature is tangible, Kammerflimmer Kollektief’s version is full of melancholia. It’s their notion of an art form in which the musicians are builders, aural sculptors of a modern world – it’s the collective as creators.

Teufelskamin (Staubgold, 2011) **** ½
This collection of songs is Kammerflimmer Kollektief’s winter album. In the middle of an icy landscape they have built an igloo which keeps you warm and provides shelter from the snow storms outside. There is an immense beauty in these tracks, the guitar layers are sparkling and Aumüller sounds like a dark fairy incarnation of Björk, Nico and Jeanne Lee. Very spooky!

Wildling (Staubgold, 2010) **** ½
Wildling is an album which is dominated by tenderness, vulnerability and a very laid-back groove (e.g. in “Silver Chords”). It contains some of the band’s best songs like the 13-minute-epic “In Transition (Version)” where they short-circuit dub reggae material with Ry Cooder guitars, Doors keyboards and atonal harmonium riffs, or the reduced psychedelia monster “There’s a Crack in Everything”. An album that works best when you play it loud at 4 a.m. in the morning (with headphones) in order to doze off or to sober up.

Jinx (Staubgold, 2007) ****
Jinx is music that could work for a remake of David Lynch’s mystery series “Twin Peaks“ if it was settled in the Texan desert. The cinematic quality they have always had is interspersed with free jazz saxophones, xylophones, pedal steel guitars – however, possible esoteric hints are immediately destroyed. Maybe this is their idea of country jazz (“Live at the Cactus Tree Motel”) or how “Riders on the Storm” can be integrated in a jazz surrounding (“Jinx”).

Thanks, Stef. The artwork is also excellent, that's true. Heike Aumüller is an artist, her covers would deserve an extra article.