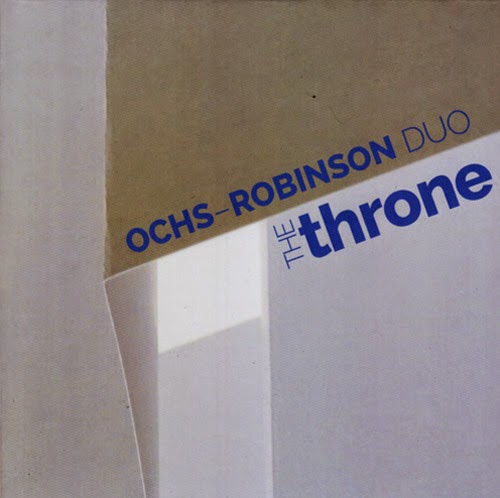 Interestingly enough, and despite his long-standing career, saxophonist Larry Ochs never released a duo album, having played in trios ('What We Live', Room, JMO, Sax & Drumming Core), quartets (ROVA!) and larger bands. The same can be said from drummer Donald Robinson, who has been collaborating with Ochs over the years in various bands, including in the late Glenn Spearman's Double Trio.

And now listening to just the two of them improvising to high heaven is an absolute treat : energetic, intimate, ferocious, playing nine tracks each with a different character and set-up, yet all fitting well in an overall coherent vision. That vision is one of lyricism and rhythmic pulse, with Och's sound full of raw granularity and authentic emotions, and Robinson's drumming a delight of drive and unexpected accents, and truth be told, just listening to Robinson - fantasizing the sax away in my imagination, as I'm doing now on "Breakout" - is by itself already a pure treat, but then with the sax the pleasure more than doubles.

Both men create such a fine interaction, full of dynamic power, captivating inventiveness and sophisticated rawness, with no unneccessary fantasies, no frills or fripperies or useless ornaments, just music stripped to its bare essence of lyricism and rhythm, like some ancient tribal dance, a tribute to music itself and some of their heroes - Glenn Spearman, Lester Bowie, Muddy Waters -

This album may be part of my top-10 of sax-drums duos, together with Vandermark and Nilssen-Love, McPhee and Zerang, Eskelin and Hemingway, Hubback and Peijnenburg, Carrier and Lambert, Gratkowski and Drake, Gjerstad and Bennink, Fisch and Wolfarth, Trovesi and Centazzo (taking into account that Coltrane and Ali are somewhere in another space).