The AACM retrospective week continues with our highly subjective, entirely personal, and completely non-representative list of albums plucked from our own collections to represent what the recordings of the AACM and it's musicians have meant to us as enthusiasts of the music. Today, the years between 1985 and 1994.

Lester Bowie Brass Fantasy: I Only Have Eyes for You (ECM, 1985) 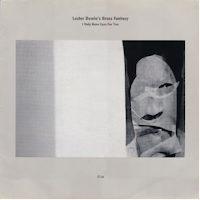 Lester Bowie’s Brass Fantasy’s debut album is a deliberate provocation. The band, a nonet consisting of four trumpets, two trombones, a French horn, tuba and drums, displays Bowie’s love for pop music while clearly being in the jazz tradition. And on top of it all the album is released on ECM, a label that is famous for its clean, glacial, some even say soulless sound. The result could have been a disaster – but it is just the opposite. The band is extremely cool and tight (especially Bob Stewart on tuba, Steve Turre on trombone and Philip Wilson on drums), the sound is full of emotional depth and the selection of the tracks – from The Flamingo’s doo wop classic “I Only Have Eyes For You” to Bob Stewart’s majestic and uplifting “Nonet” – take the concept of Ancient to the Future to the next level because in spite of the pop approach the music breathes the spirit of gospel and blues. If you need just one example listen to Lester Bowie’s “Coming Back, Jamaica”, one of the best reggae tracks ever, which is dominated by the mother of all tuba solos. One of my all-time-favorite albums! (MS) 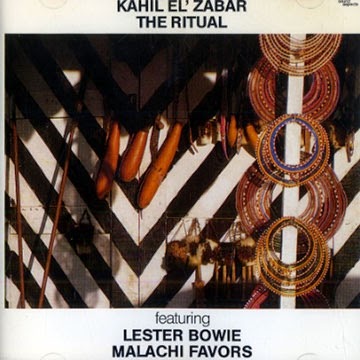 This is actually the first CD by Kahil El'Zabar's Ritual Trio, although not yet named as such. In essence this trio consists for two thirds of members of the Art Ensemble of Chicago : Lester Bowie (trumpet) and Malachi Favors (bass), who play one of their own songs, Magg Zelma (from Full Force, 1980) on this album. This is just one song, but still close to 42 minutes long. This music has deep SOUL, sensitive, solemn, intense, open, authentic, respectful. One of the most beautiful and compelling trumpet-bass-drums trios ever.

The artwork of this album should not be confused with the album "Sacred Love", released two years later and with Raphael Garrett on clarinet.  (SG) 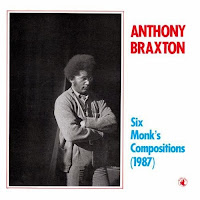 Thelonious Monk's unique compositions have been the inspiration for many composers and players and so while it is little surprise that Braxton would be drawn to his music, it was a surprise to me how irreverently (but respectfully) interpreted they are on this album. Though Braxton speeds them up, fleshes them out, and deepens them harmonically - you still hear all the those wonderfully Monkish melodies. However, where you heard the puzzling juxtapositions in Monk's versions, laid out like bare bold puzzles, here they seem like the blueprints for what Braxton builds on top of them. Monk's stride playing is still present in pianist Mal Waldron's solo on 'Four in One' and one can only marvel at Braxton's inspiring playing on the opening 'Brilliant Corners' and, really, throughout the recording. Rounding out the group here is bassist Buell Neidlinger, and drummer Bill Osborne.  (PA) 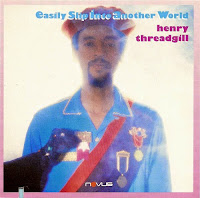 On Easily Slip into Another World, saxophonist and composer Henry Threadgill arranges a sextet recording that is a mix of styles both mainstream and avant-garde. It was one of his three albums on the Novus label - a late 1980’s production, which you can tell simply from the fonts on the album cover. Threadgill is joined here by trumpeter Rasul Saddik, trombonist Frank Lacy, cellist Diedre Murray, bassist Fred Hopkins, and drummers Pheeroan Aklaff and Reggie Nicholson. The vocals on the track 'My Rock', which is well sung, but not my cup of tea, is by Ahsa Puthli. The album opens with 'I Can't Wait Till I Get Home' a blues by former bandmate Olu Dara. On the surface, it seems straight ahead at first, but closer listening reveals subversions of the expected. Even the seemingly mainstream calypso ‘Black Hands Bejewelled’ has unexpected harmonies and slippery rhythmic patterns. It’s this mixing of the expected with the surprises that keeps things really rewarding. Even on the aforementioned 'The Rock', Threadgill introduces some rather unexpected passages behind the vocals that work so well. 'Hall' features a quirky beginning with the bass and cello agitating until the horns kick in the door. It's my favorite track on this album, and the one that really showcases how well Threadgill intertwines the composed, the improvised, and the unusual. (PA) 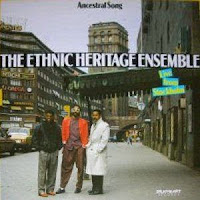 Like with all other Kahil El'Zabar bands and music, rhythm is the basis for lengthy improvisations which are less focused on the solos themselves than on the overall hypnotic, almost trance-inducing sound which is deeply rooted in African soil. The great thing about this album is its simplicity. Kahil El'Zabar plays his trap drum, thumb piano and other small percussion, Edward Wilkerson plays sax and Joseph Bowie trombone and marimba. The album starts with "Papa's Bounce", a classic in the El'Zabar repertoire, followed by "Loose Pocket", a piece that starts slowly, full of blues influences and with El'Zabar singing, but then the pace picks up, the theme sets in and we're back in uptempo free music. The title song is the trio at its best, with great rhythms, a nice theme, and sparse free soloing, all very intimate as if you're in the room with them, but then also very expansive, narrating about free movement and ancient sentiments and universal dances and common feelings and about what is more than just words and sounds. Simple and majestic. (SG) 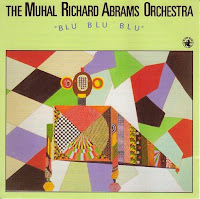 From the magnificent depths of the Black Saint/Soul-Note back catalog, Muhal Richard Abrams Orchestra's recording 'Blu Blu Blu' is a real stand out. On this big band recording, the pianist is joined by four saxophonists, a five-piece rhythm section, trumpet, trombone, French horn, tuba, and whistle. In fact there is track called 'Song For the Whistler', which in a sense, harkens back to the AACM's embrace of the small instruments. The opening 'Plus Equals Minus Balance' is an uptempo chart, prominently featuring the brass and some tasty harmonies from the saxophones. The follow up 'Cycles5' is an abstract tune that makes space for the slide whistle, as well as the vibraphone - it's a beautiful piece that incorporates an AACM aesthetic. The title track is a straight ahead blues homage to Chicagoan Muddy Waters featuring the fretless guitar work of David Fiuczynski. Quite a bit of fun is 'Bloodline', which employs a recognizable descending bass line and seems to indicate, through both the title and the arrangement, a connection with the big bands and arrangements of Duke Ellington.  See the full line up here. (PA) 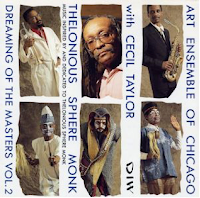 Colin called this album the Art Ensemble’s swan song – and although the band has released several albums after that, he is right: It is their last relevant recording. Joseph Jarman was about to leave the band in 1993 and in 1999 and 2004 Lester Bowie and Malachi Favors died. But this one is also a summary of their philosophy. Dreaming of the Masters Vol. 2 reflects on the works of Thelonious Monk and features free jazz titan Cecil Taylor on piano, voice, and percussion – a musician who is also a master to the AEoC. However, it seems hard to imagine how Taylor’s unique notion of music and the AEoC’s idea of a homage to Monk come together. But Taylor does simply not take part in the two Monk covers (“Round Midnight” and “Nutty”). Instead he joins the ensemble to recite his encrypted poetry (which matches perfectly with AEoC’s love for absurd theatrical elements) and contributes his musical sense of language to the improvisations (“Intro to Fifteen”).  Or he throws in his typical clusters, polyharmonic entities and volcanic sound waves very precisely to the Art Ensemble’s spontaneous compositions.  The result is a real convergence of sound wizards. (MS) 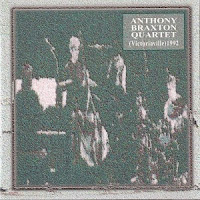 One of the truly great quartets of jazz, in a recording that catches them at their peak: Braxton (reeds), Marilyn Crispell (piano), Mark Dresser (bass) and Gerry Hemingway (drums, percussion).

The quartet had toured extensively since the previous year, and were familiar with Braxton’s unique notation and building of layers, individually and in tandem, to exploit his fascination with simultaneities. They knew what worked, but were confident enough to take risks.

From the outset, there’s a glittering mosaic of motifs and cross-references tossed around the quartet like a high-class juggling act – music of wit and élan in the face of which the often-made criticism that Braxton’s music is overly formalistic, simply evaporates. As a reviewer said of their performance on Quartet (Santa Cruz) 1993 (hat ART, 1997): “To listen and think this quickly is not mere communication – it is telepathy.”

The performance is intelligently paced, balancing ensemble complexity with equally effective solos and duos, such as the ravishing dialogue between Braxton’s bass clarinet and Hemingway’s tuned percussion. And to top it all, the encore’s a hell-for-leather rendition of Coltrane’s Impressions. The performance as a whole can stand the inevitable comparison. (CG) 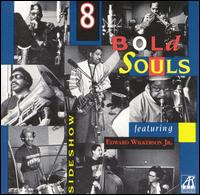 8 Bold Souls is the band lead by Ed Wilkerson, and which is characterized by the deep sound of the horn section and the fascinating mix between heavily orchestrated and structured pieces, combined with very free improvizations. The emotional and musical power of this 8-strong ensemble is relatively unique and very recognizable. The band consists of Ed Wilkerson Jr on tenor, alto and bass saxophone, clarinet and alto clarinet, Mwata Bowden on clarinet, baritone, and tenor,  Robert Griffin on trumpet and flugelhorn,  Isaiah Jackson on trombone, Aaron Dodd on tuba, Naomi Millender on cello; Harrison Bankhead on bass, and Dushun Mosley on drums and percussion. Some snapshots : "Black Herman" presents the dark, deep-toned menace of the horn section, supported initially by a very sparse bass-line and ditto drums, changing the tempo after about five minutes, and then the band starts in full swing, with great solo pieces from all the musicians, including cello and bass. This album brings us also one of the best versions of Ornette Coleman's "Lonely Woman", starting with a long, heart-breaking and piercing duet between arco bass and cello, wonderfully emphasizing the absolute sadness of a crushing loneliness, even more fully accentuated when the horns start with the well-known theme. This track by itself justifies the purchase of this album. This music is not changing music history, but it brings a great synthesis of orchestra music, free jazz and bop. Creative and very expressive. A true AACM album! (SG) 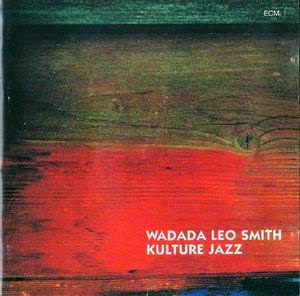 This album is a little solo gem by trumpeter Wadada Leo Smith, who also plays flugelhorn, koto, mbira, harmonica, bamboo notch flute, percussion, as well as sings on some tracks. The music is intimate, going back into the roots of music, from Africa, blues, folk, jazz and then taking this tradition up in his own 'creative music' approach. At the same time, it is a tribute album to all his influences : Albert Ayler, Louis Armstrong, Billie Holiday, John Coltrane, to his mother, family and friends (names mentioned for each track), and on top a tribute to life and humanity. The music is gentle, intimate, personal, deeply emotional, expansive, uplifting and spiritual. It has roots deep in the soil of the Mississippi Delta yet with eyes and a heart reaching as far out across the sky as possible. (SG)