The AACM retrospective week continues today with our highly subjective, entirely personal, and completely non-representative list of albums plucked from our own collections to represent what the recordings of the AACM and it's musicians have meant to us as enthusiasts of the music. Today, we present the years between 1995 and 2004. 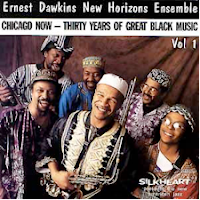 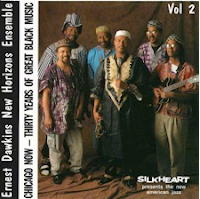 Ernest Dawkins was a neighbour of Anthony Braxton as a youth and remembers hearing him practise. Having survived that, perhaps unsurprisingly he first took up bass and drums before eventually deciding on the saxophone in 1973. He studied with members of the AACM, and replaced Ed Wilkerson in the Ethnic Heritage Ensemble (Papa’s Bounce (CIMP, 1998) is toe-tappingly good).

In 1979 Dawkins formed his own New Horizons Ensemble which played extensively for a number of years, and it shows. This pair of albums celebrated thirty years of the AACM back in 1995, but since good music doesn’t date they deserve a place in this half-century batch of reviews.

As one would expect, there are some infectious rhythms but with plenty of fluid playing on top, In true AACM style however, Dawkins refuses to be pigeon-holed. There are three improvisations – of which Improvisation #3 is the longest, and best – and Flowers for the Soul contains a coruscating free jazz solo from Dawkins, accompanied by Jeff Parker’s spiky guitar.

The highlights however, are two tributes. Dream for Rahsaan (presumably, Roland Kirk) a languorous tune – beautifully voiced by the Ensemble -- with crafted solos from Ameen Muhammad on trumpet, Dawkins and Parker Any doubt about the subject of Many Favors is removed by the bass introduction and an occasional Art Ensemble feel, including hand bells and whistles. Again, a theme of aching beauty treated with sensitivity by the whole Ensemble.

To hear more of Dawkins in a free jazz vein, there’s no better way to spend a couple of hours than soaking up the Chicago Trio’s Velvet Songs to Baba Fred Anderson (Rogueart, 2011) (CG) 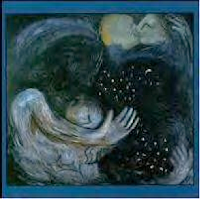 Anderson played on some early AACM albums, but due to other commitments recordings didn’t appear until the late 1970s, and then relatively few until the last twenty years or so of his life. There are even fewer recordings of him with a piano. In this performance, the established duo of Anderson (tenor saxophone) and Drake (drums, percussion) joined Marilyn Crispell (piano) – on her request – at the Women of New Music Festival held in Chicago in 1994.

Anderson believed strongly in preserving a tradition, keeping a musical culture alive, and regarded his music as an extension of Coleman Hawkins, Lester Young and Charlie Parker, the saxophonists of his youth and “the AACM of their time”. It can be heard in the warmth of his tone and the supremely articulate nature of his playing – free jazz, not random. He had a repertoire of short tunes – he thought of them more as phrases – which tended to form the basis of his improvisations and in this performance, one of his most memorable provides the theme on which each of the Destiny variations is based: sprightly and tender by turns. We get Crispell’s familiar staccato clusters and darting runs in Destiny 1, but Anderson brings out the melodic invention that’s always characterised her playing. Destiny 3 is pure ballad, and in Destiny 5 we reach the emotional core of the performance when the theme takes on a Coltrane-esque grandeur, with Anderson’s tenor suspended over Crispell’s tremolos. Time stands still. After rapturous applause, he shows he can deconstruct a tune along with the best.

Drake as always, ensures that everything flows as smoothly as possible, a standout moment being his tabla accompaniment when Crispell reaches inside the piano. The only downside is that the piano’s seen better days.

If you like Fred and a piano, also try the first CD of Muhal Richard Abrams’ SoundAspects (Pi Recordings, 2011): two co-founders of the AACM spurring each other on to ever greater heights. It’s inspirational. (CG) 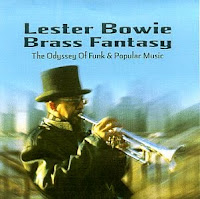 I recall buying this one when I was on a brass band kick back in the late 90s. At the time I knew nothing about Lester Bowie or the AACM but I did know about the Spice Girls and when I heard Bowie's formidable arrangement of '2 becomes 1' on WBGO, I think I nearly cried. Just how, I thought, has he found the song that I just heard in that sliver of processed cheese? So, I went to the local record store (yes, the good ol' days) and picked up the CD and proceeded to really enjoy the rest of it as well - from the smokey  'Birth of the Blues' to the percussive menace of Marilyn Manson's 'Beautiful People'. Aside from some of the period production, two tracks with dated sounding rap, and those occasional bar chimes, it's still a bright spot in my collection. Bowie's music transcended - hell it elevated - the source material, even 'Don't Cry For Me Argentina' had some decent moments.  (PA) 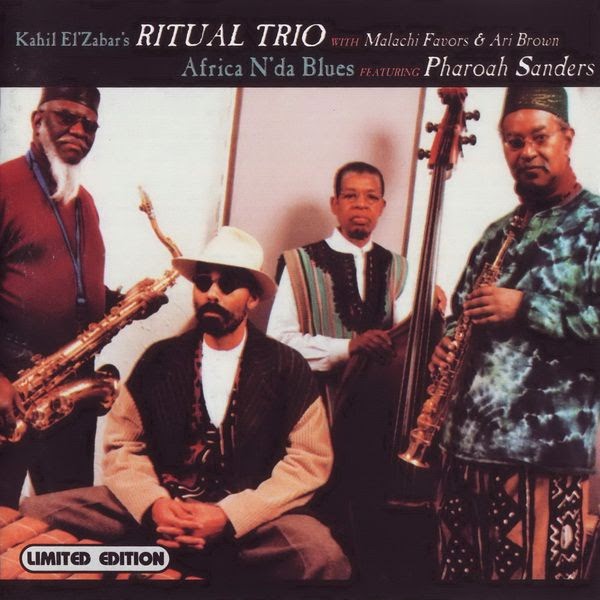 It is difficult to make a selection of all the dozen albums that Kahil El'Zabar released with his Ritual Trio or with the Ethnic Heritage Ensemble. Usually his music is pretty straight-forward with a core theme, long improvisations, lots of African rhythmic elements, and a deep sense of soul. "Africa N'Da Blues" might be a good introduction for readers not yet familiar with the master drummer. The "trio" is for once extended with some guests : El'Zabar is on drums and percussion, Malachi Favors on bass and Ari Brown on sax and piano. The guests are Pharoah Sanders on tenor and Susana Sandoval on vocals, on the beautiful "Africanos Latinos" only.

The nice thing about El'Zabar's music is that it never shocks, it is never wild or ferocious, yet it does color outside of the lines. There is even some place for "Autumn Leaves" on this album, yet "Ka-Real" and "Pharaoh's Song" are more in line with the Trio's other albums : a hypnotic rhythmic foundation for African chants and saxes to sing, dance and jubilate with the soul of life.  (SG) 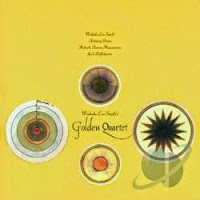 Apart from almost systematically receiving 5-star ratings from me, the only common denominator in Wadada Leo Smith's music is his phenomenal trumpet-playing. He has many different approaches to music, with his "bitches brew style" Yo Miles! band, his more contemplative solo and duo works, his more ambitious recent works with strings. Here we have his Golden Quartet in its original line-up with Wadada Leo Smith on trumpet, Anthony Davis on keyboards, Maghostut Malachi Favors on bass, and Jack DeJohnette on drums, with all four musicians member of AACM or closely related in the case of DeJohnette. The instrumental quality of the four musicians allows for technical and compositional complexity, which will become the trademark of the quartet for all their output, but luckily they keep their distance from fusion-like pyrotechnics: it's all about the music, which has an amazing tension between nervous agitation and zen-like calm, with lots of other paradoxes such as a strong jazzy feel, yet avant-garde dynamics and sonic colors, such as a strong compositional structure with an overall sense of freedom in the execution. (SG) 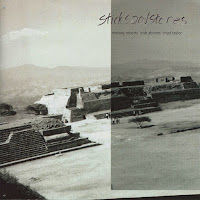 This is one of the first albums - if not the first - on which altoist Matana Roberts has the lead voice, with Josh Abrams on bass and Chad Taylor on drums. It is a very gentle and welcoming trio album, one which already has the sound of Roberts' later music : warm and buttery on the horn, full of respect for the musical tradition, yet sufficiently liberated and with sufficient character to push things a little bit further.
Roberts had been classically trained as a clarinettist, joined AACM and was (is?) a member of Burnt Sugar, the jazz-funk-soul-rock band. On this album, and on "Shed Grace", its sequel from 2006, we hear something completely different : melodious music, very jazzy, rhythmically superb and very unassuming. It does not have the ambition of Roberts' "Coin Coin" series, it is all about the music, and not about the message, which gets my preference. Many will contradict me here, but so be it. If you like Roberts and Abrams and Taylor, it's really worth looking up this trio album.  (SG)

Fred Anderson - Back at the Velvet Lounge (Delmark, 2003) 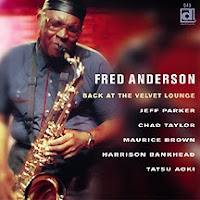 An AACM member from the outset, it took time before Anderson received anything like the exposure of his colleagues. He went largely under/un-documented until his later years, subsequently every recording he features on feels like a gift. On Back at the Velvet Lounge, recorded at the club he ran for several decades, he is joined by Maurice Brown, Jeff Parker, Harrison Bankhead, Tatsu Aoki and Chad Taylor as they navigate five blues-tinged Anderson originals. With a tone simultaneously suggestive of both sides of the '59 divide, Anderson inhabits a space which is seemingly both well defined but boundless in potential, shaped by bop conventions and freed by the avant-garde.  (MG) 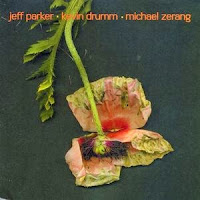 In a recent article the Chicago Tribune made the case for the AACM having influenced the city's avant-rock community. Out Trios Volume Two provides a compelling argument in favour of this position, and demonstrates the feedback between disciplines. (Associate) AACM member Jeff Parker, positioned firmly in both camps, reprises his relationship with Michael Zerang (Vega Trio) and is joined by electro-acoustic texturalist Kevin Drumm. The resultant recording is filled with post-AMM clatter, gritty timbres and extended techniques, the lines between contributors quite literally blurred and distorted. Whilst insular and focused, the album demonstrates the open exchange of sounds and approaches which exist in the margins of differing 'Avant' musical communities. (MG) 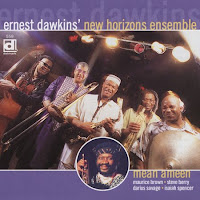 Despite saxophonist Ernest Dawkins' long experience as a jazz musician, he has not released that many albums under his own name. He is former president of Chicago's AACM and member of several bands including Kahil El'Zabar's Ethnic Heritage Ensemble. Yet most of his records are of interest, and this one, "Mean Ameen" is one I keep putting back in my CD-player very regularly. It's more free bop than free jazz, all pieces have a clear compositional structure and fixed themes. But all that's irrelevant. What is relevant is the music itself. And it's awesome. Blues-drenched, heart-rending, swinging highly rhythmic music with fantastic improvizations by the whole band, which consists of Maurice Brown on trumpet, Steve Berry on trombone, Darius Savage on bass and Isaiah Spencer on drums. The album is a tribute to former "New Horizons Ensemble" trumpeter Ameen Muhammad, also known as "King Ameen", who died in 2003.

Now, the great thing about this album is it's hard to equal heart-energy-music continuum. The raw emotions and the unbridled energy resulting in this great rhytmic and musical feast, sad and joyful at the same time, have rarely been equalled. Every track on the album is great, but the absolute highlight is the last one, "Buster And The Search For The Human Genome", which is a 16-minute long rhythmic monster of a song, starting slowly and bluesy but gradually the tempo is speeding up to some break-neck velocity, with staccato unisono blowing by the horns, fierce soloing, with abrupt and sudden breaks, nothing more than a pause for breathing, when the whole monster gets back on top-speed, dragging the listener along to musical areas where everything is possible. Impossible to remain indifferent. This is not a record which will change the history of jazz, but it is the result of it : authentic, creative, rooted in tradition yet free as a bird. As the liner notes say : "King Ameen is smiling from up high". (SG)