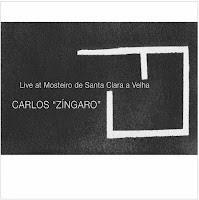 Carlos "Zíngaro" is one of the pioneers of the Portuguese free improvise scene, and still, even today he is considered one of the most influential and creative musicians in the ever-growing local scene. His prolific genre-blind, genre-encompassing work began with his group Plexus, and as a prolific sideman studio musician during the rule of António Oliveira Salazar, challenged the authoritarian, fascist aesthetics of that regime and encouraged free thinking and free expression. During his long career “Zingaro” collaborated with the greatest European improvisers such as Derek Bailey, Joélle Lèandre, Peter Kowald and Daunik Lazro.

His solo recordings are few so far - Solo (In Situ, 1989) and Cage of Sand (Sirr, 2002). This live solo recording from 2012 at the 14th century monastery in Coimbra captures “Zingaro's” greatness as an artist. His sound blends an emotional, lyrical vein with a constant need to push forward and experiment with its timbral spectrum and extended techniques, with silence, with the impressive reverberating qualities of the historic hall. His music is urgent yet reflective, abundant with surprising ideas, flowing organically despite its free-form spirit and never loses its focus.

“Zingaro's” music still expresses the call for freedom, free thinking and his conviction to struggle against any repressive system - political or artistic one. His art distills these noble ideas into music, passionate, immediate and full of hope. 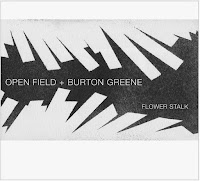 The meeting between veteran free jazz pianist Burton Greene and the Portuguese trio Open Field String Trio- double bass player José Miguel Pereira, guitarist Marcelo dos Reis (both play together in the Fail Better! quintet) and viola player João Camões, reminds Greene of his own coming to age as a free-thinking musician in the beginning of the sixties. Greene tells in the liner notes about he began to experiment playing outside the form, finding his own voice as an artist, the constant attempt to go beyond accepted musical conventions. He adds about the seminal influence of Thelonious Monk, Cecil Taylor, Ornette Coleman and Alan Silva had on him as a free-thinking improviser who focuses on exploring spontaneous, non-idiomatic forms that transcend genres and styles.

The Open Field trio was formed in 2009 in attempt to break the same boundaries between genres and styles with a sense of real open field. The trio played before with innovative improvisers as Elliot Sharp and "Zingaro", and got in touch with Greene through Facebook. In 2012 this new quartet played several performances in Portugal before heading to a recording studio in Lisbon.

Greene felt during the recording session the same uplifting spirit that he felt in the sixties, when he began to play free, creative music, despite the generation gap between him and the young Portuguese colleagues. The four create an open, intuitive form of art, based on attentive listening, trust and collective spirit. The five pieces encompasses elements of chamber jazz, contemporary music, Mediterranean folk (on “Ancient Shit”) and some distant echoes of jazz, but none of these genre descriptions apply to this music. The quartet manages to form a balanced interplay that highlights the strong personalities and the subtle, yet intense, dynamics of the quartet. Each of the pieces suggests a different texture and only “On the Edge” come close to the fiery spirit of the sixties free jazz. Greene serene solo piano piece “Greene Hands” stress the essence of his art - moving, wise and timeless.