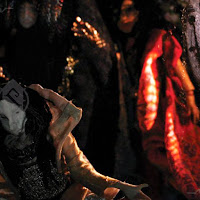 Ikue Mori is an award winning musician, having started her career as the drummer for the no wave group DNA, then moving into sampling and laptop electronic music. She has worked with members of Sonic Youth and Henry Cow, with John Zorn and others, and has recorded a series of solo works on the Zorn label Tzadik. "Light in the Shadow" is her latest work, ten tracks of delicate, intricately detailed soundscapes that references traditional Japanese music, middle eastern beats, 50's exotica, and 80's experimental noise.

Listening to Mori's music is like entering into a sonic art installation; one is surrounded by textures and effects that are skillfully arranged in a way that can be engaging. The opening track, "Koya Hijiri" is a fifteen minute long piece that evokes the journey that the low caste Japanese monks take when sent to spread the word of Buddhism. "Mozu," spread though out the album in three parts, are abstract rhythmic works that dip into the "Quiet Village" sound with slight industrial effects. "Basharaf" is an enjoyable piece with a light, funky middle eastern beat. "Orot" is a gorgeous work with chimes, circulating repeatedly. The album's final two tracks "Pomegranate Seeds #1 Sea Nymphs" and "Pomegranate Seeds #2 Underground King" are exotic pieces, light and bubbly in the former, dark and murky in the latter.

"Light in the Shadow" is another fine work by Ikue Mori, one of delicate wonder, incorporating many genres and elements to create her own unique soundscape.