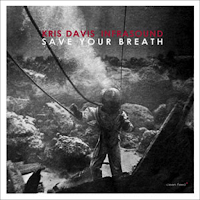 In what is becoming a formidable series of recordings, Kris Davis continues to demonstrate her strengths not only as a pianist but as a composer.  She did this to great effect on last year’s Waiting for You to Grow, an outstanding trio record with John Hébert and Tom Rainey - and once again with this disc, her newest release.  Indeed, this one is even more impressive, as Davis has expanded her compositional vision with one of the more unusual groupings of instruments I can recall hearing.  Here she’s working with an octet, which includes (in addition to Davis) a rhythm section of Jim Black (drums), Gary Versace (organ and accordion), and Nate Radley (guitar), and perhaps most surprisingly, four bass clarinets, played by Ben Goldberg, Oscar Noriega, Andrew Bishop and Joachim Badenhorst.

What is clear from the outset is that this is a record built around atmosphere and mood rather than instrumental virtuosity.  Which is not to say that any of these players are slouches—far from it—but that Davis has much bigger things in mind than a blowing session.  Each of these six tracks has a distinctive feel and sense of purpose, and while there’s ample room for the musicians to pursue a few twists and turns along the way, it’s abundantly evident that Davis has intentionally constructed these pieces in order to forge a collective sound for each one, although in dramatically different ways from track to track.

The album’s opener, “Union Forever,” develops an infectious series of patterns played principally by the clarinets, with Black, Radley and Versace keeping the rhythms shifting unpredictably, finally moving into a more straightforward 4/4 segment for the second half of the tune in which Versace really lets loose.  Several of the tracks make especially good use of Black’s rock-inflected drumming style, which often works to establish a groove and ratchet up the intensity level of the group.

But although the record definitely delivers some hard-hitting punches, it’s often the more subtle moments that are most effective, particularly because here Davis gets to explore the rich sonority and textures this unusual blend of instruments makes available.  The beginning of “Jumping Over Your Shadow,” for example, the record’s second cut, has some really interesting interplay between the bass clarinets, creating a sense of dark mystery to pull the listener in, only to gradually evolve into a more aggressive, confrontational mood once Black starts to interject on the drum kit and Versace joins in with some effective piercing jabs.  And the most interesting cut of all is probably the record’s title track, an almost 15-minute exploration of sound and mood in which Versace employs his understated, atmospheric organ work.  It evokes the album’s cover photo perfectly, as the sense of discovery and hint of danger accompanying a deep-sea dive is exactly what the track provides.  And when Radley, Davis and the others gradually enter the picture, expanding the sense of wonder and the unexpected, the result is captivating.

Davis has summarized her view of this group as a “living, breathing wild animal,” and given the musicians’ willingness to work cohesively to create a single group identity and to regularly go in unexpected directions, that’s an apt analogy.  This record will no doubt continue to build Davis’s growing reputation as one of the most exciting composers working in today’s music, and the group as a whole is certainly deserving of the accolades that should come its way.

Nice review & very good album, but the name of the record is "Save Your Breath." :-)

Thanks Antonio ... rectified in the meantime.

Well-written, mouth-watering review, Troy. I will definitely check this album out.

Kris Davis has become one of those artists that when I see she has put out a new album, I go purchase a digital copy from Bandcamp or Amazon (my two favorites) and then I listen to it while I read the review. This is another solid outing and a very different sound from this ensemble. She is proving to be a great talent and I am a big fan. I also love this website and all the contributors who do such a marvelous job making my music collection one of my prized possessions.
Thanks Troy

I agree fully with you, Steve. Davis is one of a number of young pianists working today who combine technical brilliance with real compositional creativity. You always know they're going to do something interesting and worthwhile. Folks like Craig Taborn, Vijay Iyer, or Matt Mitchell, in addition to Davis--and those are just the ones off the top of my head. Times are good for fans of the piano!

I was expecting to love this because of the clarinets. And I do, but the real revelation IS the organ playing. Also, great review!

This is phenomenal. Kris Davis has yet to dissappoint this fan.