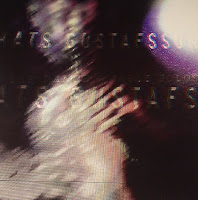 Lap Dance is a 7’inch consisting of two short solo performances recorded at Brooklyn Bar in Stockholm on 12/14/2011. The story behind it goes like this: Gustafsson was actually supposed to play a full concert but allegedly the people didn’t care much (according to the internet it was an audience of five plus some people at the bar), someone even spilled a full glass of beer over his merchandising stuff. In the back you can hear the bar people talking very loudly. At last, Gustafsson ended up at the head of the table of the interested listeners and played for them. Luckily, one of them recorded the stuff because “Lap Dance” and “Table Solos” are great pieces, they work as an almost ideal introduction to Gustafsson’s solo work. Although there are his usual outbursts the two tracks are very accessible, he soars in a very playful and light-hearted way.

Lap Dance is available on transparent vinyl only and limited to 200 copies.