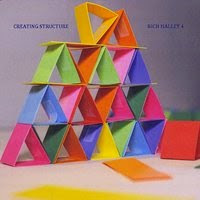 Still a relatively unsung commodity based in Portland, the Rich Halley 4 have been creating adventurous yet groove-oriented recordings for several years—in fact, this is their fifth in five years on the Pine Eagle label, following up on last year’s excellent Wisdom of Rocks. And while it’s tempting to say that it’s “more of the same,” these guys have been in the sweet spot of freebop-based improvisation for long enough that sticking with what works is a pretty strong strategy.

The record is aptly titled, as each of the sixteen tracks displays a variety of ways in which a song’s logic can emerge during the exploration of an unplanned, uncharted path. Bassist Clyde Reed and drummer Carson Halley are pivotal, as their ability to follow and lock in behind the horns offers structure, yes—but not so much structure that tenorist Halley and trombonist Michael Vlatkovich are restricted in their ability to seek out new options within each song. One can tell that Carson Halley has indeed been influenced by both the rock and jazz traditions, as his eagerness to bring a driving beat to a lot of the songs really enhances the group’s dynamic power. And Vlatkovich and Halley have a great rapport as well, alternately interweaving spontaneously-conceived lines and shadowing each other’s moves as they see fit. This definitely sounds like a band that has worked closely together for years, as their fluidity and intuition are evident on each cut. It’s also worth noting that these guys know when to enter and exit, without overstaying their welcome: with no track extending beyond seven minutes, and most a good deal shorter than that, there’s no pointless meandering. The overall effect on the listener is to want a bit more, which is a fine thing when the music is this good.

Highlights include the record’s opener, “Analog Counterpoint,” a bouncy, spirited piece featuring just Halley with the rhythm section; “Riding the Trade Winds,” where you can hear Halley channeling a bit of Newk’s “St. Thomas” with an infectious calypso-esque rhythm; “Metal Buzz,” offering a terrific unaccompanied dialogue between Halley and Vlatkovich; and “The Shove,” a propulsive burner with especially effective punchy drumwork from Carson Halley. But truthfully, there are engaging moments throughout the disc, as each track provides a distinctive and well-executed statement. Definitely a record worth getting!

Here’s a video of the quartet playing recently in New York City: