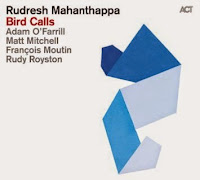 Material dedicated to a jazz legend and the absence of master guitarist David Fiuczynski cast a shadow of doubt on whether New York-based saxophonist Rudresh Mahanthappa would be able to replicate the goodness that was his previous album Gamak. While he’s undeniably a great player and an eclectic songwriter, the artistic success of his records quite often depended on the quality of his cohorts. Plus, the prospect of yet another homage album just didn’t sound too inviting.

Superfluous and anachronistic hybrids of standards in newish arrangements, that’s what most “tribute” albums, especially in mainstream jazz, end up being. Not this time. Bird Calls is really good. While still clearly a love letter to Charlie Parker, his spirit embedded in many phrases, melodies, rhythms, and even in Mahanthappa’s energetic play style, the music is recognizably contemporary and the songs presented on the album are all originals which never dwell in the territory of the uninspired or lazy. Take “On the DL,” for example, a tune that demonstrates how Mahanthappa borrows just enough from Parker’s classic “Donna Lee” to jump-start an avalanche of aggressive, free-wheeling, and wild jazz that is sprinkled with explosive, lively solos, and fueled by a progressive, pulsing piano. The main tracks here all go down the route of deconstructing and analysing Parker’s music through the prism of modern jazz and Mahanthappa’s specific sensibilities and influences, with just a hint of humour and whimsy on the side. Other than the aforementioned “Donna Lee”, standouts are “Parker’s Mood”, which acts as a sort of bridge between Charlie Parker and Albert Ayler, and the extraordinary “Gopuram” with its typically Mahanthappian melodic and rhythmic spices imported from Indian ragga. Aside from these tracks and the likes of “Maybe Later” and “Sure Why Not?,” which come closest to the idioms of bop and traditional jazz in general, the record is held together by six miniatures. “Bird Calls #1-#5” and “Man, Thanks for Coming” serve as prologue, intermezzos, and epilogue, but also provide shorter pauses in the otherwise relentless flow, giving the musicians a chance for freer solo explorations and showcasing the band’s lyricism.

Speaking of the band, it features both well-known and fresh faces this time around. Alongside Mahanthappa, it’s young Adam O’Farrill’s trumpet and Rudy Royston’s drums that carry the album. Both these players leave an impression of knowing exactly what Mahanthappa requires and wants from them. On the other hand, we have Matt Mitchell on piano and François Moutin on bass who, while undeniably skilled, are never quite in the spotlight and remain rather subdued instead. Still, it’s Mahanthappa’s playing that steals the show. He’s a vigorous, tireless saxophonist with a swirly, effervescent, and extremely dynamic approach that results in a constant feeling that his saxophone might suddenly explode and detour towards Peter Brötzmann’s punk aesthetics. That jump never happens and he remains in equilibrium on the border of control, sounding mesmerizingly exciting and scintillating. It’s his playing that gives the music a recognizable and, frankly, hellishly fun tint.

When looking at Bird Calls as a whole, it becomes clear that Mahanthappa has succeeded in creating an album that is nominally dedicated to and inspired by Charlie Parker and yet feels quite his own. That alone would be something worth writing home about. Wholeheartedly recommended!