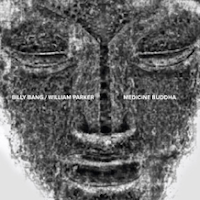 The beginning is an invocation, a zen-like drone, concentration and meditation, before Billy Bang’s violin tears William Parker’s arco bass into pieces – like a hurricane does it with flags that people forgot to bring down. “Medicine Buddha”, the title track of this album”, explores variations on this hypnotic arco drone, touching on Steve Reich’s minimal philosophy as well as on a steady groove and classic free jazz aberrations for more than 22 minutes – and Parker and Bang, these brothers in improvisation (until Bang lost his battle with lung cancer in 2011), pass the ball to each other with unerring certainty.

Medicine Buddha documents one of their last collaborations at the Rubin Museum of Art in New York in the spring of 2009, the album is William Parker’s last good-bye for a lifelong friend (his liner notes are of the highest appreciation for the musician and the human being). In addition, Bang’s violin is both mournful, no matter what “abstract sound he made (it) was draped in the blues”, and joyous and vivid. Parker foils this sound with low and mumbling tones, once again you can literally feel how loud and pointed he can play (especially when he plucks).

Both musicians can also be heard on other instruments (Bang on kalimba and Parker on dousn gouni on “Bronx Aborigines” and Parker also on shakuhachi on “Sky Song”) which give the performance a certain spiritual world music touch. What remains are two Parker compositions – “Eternal Planet”, a classic piece that pays tribute to the late violinist Leroy Jenkins and which indeed sounds like a Revolutionary Ensemble piece, and “Buddha’s Joy”, which builds on a call-and-response melody that could almost pass for a danceable composition.

What’s so great about this music is the fact that you can literally listen to a friendship, to a deep emotional connection, to the contrasts of a dark and sombre bass and Bang’s violin soaring as high as it can to a single singing note. In its best moments the album is filled with absolute magic leaping off the strings, dynamic plucks, a vortex of overtones, and an enthusiastic commitment to sheer beauty.

Medicine Buddha is available on CD and you can buy it from the label.