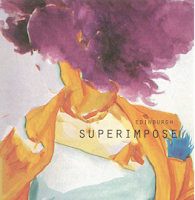 In Max Frisch’s “Homo faber”, a novel about an engineer who is trapped in his technological view of the world, the protagonist and his daughter Sabeth play a game while watching the Aegean Sea.  They try to find as many comparisons for natural phenomena as possible. For Walter Faber, whose vocabulary seems to be restricted to the world of logical reasoning, it is hard to keep track with Sabeth, whose comparisons also include mythology, the arts and nature.

Playing their game while listening to Superimpose’s Edinburgh would have been a real challenge for them. Faber might have compared the music of Matthias Müller (tb) and Christian Marien (perc) with the creaking of the floorboards in old buildings, with wind hammering against huge metal boards, with flags fluttering in a tornado or with the sounds of the machines in a huge shipyard, while Sabeth might have heard a lonely horn at midnight on a Swiss alp accompanied by an orchestra of owls, the roar of a dinosaur during mating season or the sound of a winter storm blowing over a North Sea island.

In general Müller and Marien try to find a unique sound for what they do, trombone and percussion merge into one sound, maybe into the voice of a huge, melancholic animal. Since 2006 the two musicians, who are both part of Berlin’s highly creative Echtzeit scene, have been rehearsing and touring intensively and they have been trying to develop their own musical grammar and syntax. Standing on the shoulders of giants like Albert Mangelsdorff and Paul Rutherford, Müller – one of the most interesting European trombonists of his generation (and possibly the most under-estimated one) – has always been pushing the limits of his instrument and he has also been exploring the possibilities its sound, for example in his Going Underground project with Chris Heenan and Nils Ostendorf with which they play in caves in order to “to create a space for a fuller aesthetic involvement with the audience by re-thinking notions of musical space and place using the caves as both a site of artistic experiencae and as an aesthetic source from which it springs”. He tries to establish something like that with Superimpose too, and in Christian Marien he has an ideal partner, who uses his “drum kit” not to create any kind of pulse but to invent unusual and unheard sounds (see the video below). The result is music which is extraordinarily clear, intrepid, focused and deep, because the musicians understand each other intuitively. Those who like sound excursions á la John Butcher should definitely give this album a try.

Edinburgh was recorded live at Reid Concert Hall in Edinburgh on March 2013, the graphic design is by bassist Clayton Thomas.

It is available on limited vinyl and as a download. You can listen to “Part 1” here:
http://wideearrecords.bandcamp.com/album/edinburgh

You can also watch excerpts from a live performance here: