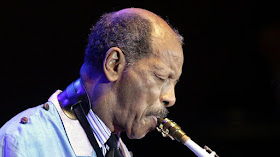 Sad news. Today, jazz legend Ornette Coleman passed away. There are no words that can express our grief and we share our thoughts and feelings with his family and beloved ones.

Coleman was one of the absolute greats. Self-taught but with a clear vision of how music could sound, and especially could sound differently. Against all prevailing music theories or conventions, he tried to reduce jazz to a more simplified, and in the process, also more free form, doing away with harmonics, or at least building the harmonics on the melody instead of the other way round. Getting rid of the piano or a guitar as the chord instrument in the band was one of the more practical consequences of this. He also reduced the importance of rhythm, and allowed free-er structures and approaches. In the late 50s and early 60s he was severely criticized by other artists who did not take him seriously, and even today, some have not understood his importance to music.

If you listen to his early music today, you wonder what all the fuss was about. It all sounds so welcoming and not avant-garde at all, which by itself already says a lot about his influence over the years, including on John Coltrane and Albert Ayler, two of the other legends of improvised music.

For some, he may have been the epithet of noise and chaos, but few musicians have been able to write such a large amount of beautiful compositions, that have become standards by today's notions. Think of "Lonely Woman", "Broken Shadows", "Happy House", "The Blessing", "When Will The Blues Leave?", "Turnaround", "Peace", "Focus On Sanity", all tunes that have been played abundantly by many mainstream jazz musicians too.

The real musical adventure started with "Free Jazz", the 1961 album that really was a full-fledged double quartet collective improvisation without planning and structure. This went way beyond what even avant-garde musicians were comfortable listening to, yet even if by today's standards, it still sounds rhythmic and boppish, but he opened a door that could not be closed anymore. This door gave access to new ways of playing music, new ways of interacting, new ways of expressing oneself, and offered listeners access to sounds that were as overwhelming as they were fascinating.

The great thing about Ornette Coleman was that he kept reinventing himself and his music throughout his life, not always successfully in my humble opinion, but that's the price you have to pay if you are willing to get out of the comfort zone of success.

Luckily, in the last decade his contribution to music has become more widely understood and appreciated. In 2007 he even received the Pulitzer Prize for his album "Sound Grammar", many decades too late, and for an historically insignificant album, but I guess that's how history works.

Coleman did what few people can, and that is to overcome the shortcomings of limited instrumental skills and  lack of formal musical education, just to follow a vision that stands, in his case a vision of musical freedom and expressivity, one that has the stroke of genius and insight, bringing us sounds that nobody heard before, that confused and excited, and that have given us, and many, many listeners for centuries to come, a new way of listening, to something that is deeper and more authentic than all the sonic garbage that pollutes our airwaves.

Rest in Peace, Ornette! And many thanks for all the joy you have given us.